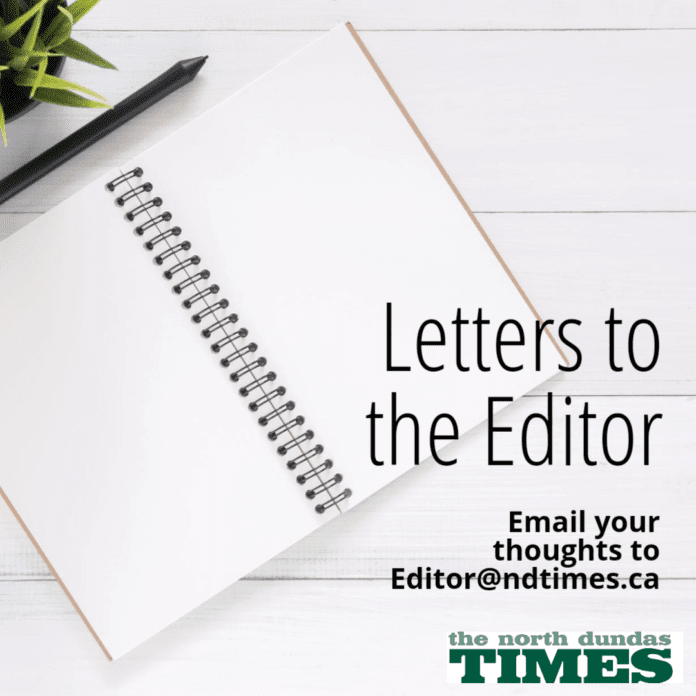 Dear Editor,
I was shocked by the rioting and invasion of the Capitol building in Washington in January and a bit smug thinking that kind of thing doesn’t happen in Canada.

Well, it is close to it when people threaten and hurl verbal abuse and insults at the Prime Minister in the name of their misinterpretation of the Charter of Rights and Freedoms.

It is the responsibility of the government, whichever Party is in power, to act for the greater good of all even if sometimes it curtails the individual Canadian’s activities.

We need a licence to drive. We cannot access health care unless we show our health card. We may not smoke in public areas. There is nothing new here.

Pierre Trudeau froze wages and prices. During WWII everyone over 16 had to register and carry their registration card at all times. Most school boards have for years required children to be vaccinated in order to attend school.

I am sure that anyone who is reading this could add to my list of actions that are
in place for the greater good of all citizens.

Citizen writer Ivison writes that these protests are a complicated situation. Hogwash!

Most of us were so relieved to be vaccinated and to see that many restrictions that
were in place to keep us safe could be lifted. These people are selfish individuals who do not give a damn for the children who cannot yet be vaccinated, who have not a clue about the history of vaccines and the lives they have saved all around the world.

They are either unaware of or do not care that measles, whooping cough, scarlet fever, mumps, spinal meningitis, diphtheria, tuberculosis, and polio have been eradicated in most
parts of the world thanks to vaccines. Do the diabetics among them refuse insulin injections?

Where is their common sense when they find out that the majority, I have read 90%,
of those now contracting this virus are the unvaccinated?

Or are they like the Trumpers who believe every lie and conspiracy theory they are fed?

If September brings us back to the same restrictions we have cooperated with for 20 months, we will know why, but we will still not understand those who are so uncaring and selfish.

Kudos for the Op-Ed by Brandon Mayer titled “Vaccine Mandates Prove the Death of Free Choice”.

I have been surprised and disappointed that more people (vaccinated or not vaccinated)
have not spoken up about the civil rights violations, privacy concerns, and bioethics issues
that Brandon highlighted so eloquently.

A two-tiered society is a violation of everything our country is supposed to stand for.

The right of dominion over your own body to choose what is injected into it is guaranteed in Canada’s Rights and Freedoms Act and the Universal Declarations of Bioethics and Human Rights.

The right to confi dentiality of our medical files is protected in Canada’s Privacy Act — what gives a shop owner the right to view anything in your personal medical file?

We, as a society, should NOT need a reminder that EVERYONE needs to speak out when civil, human, privacy rights are being violated as is the case with “forced vaccines” and “vaccine passports”.

This is not the early days of Nazi Germany where the rights of one tier of society (in that case, the Jewish community and other ethnic groups) were being increasingly violated and most people did not speak out against it, remained silent (denoting consent), complied with it or, worse, actively took part in it.

These rights apply to EVERYONE and EVERYONE should be taking a stand for them. That is what Canada is all about!

I believe it would be help ful to the voters of Stormont, Dundas, South Glengarry if your media outlet would provide local coverage of the federal election. You are a news outlet and I believe this qualifies as news.

At the very least, publication of each of the local candidates’ names would be a service to your readers.

Looking forward to your future coverage of this news.

The recent IPCC report drew upon 14,000 scientific papers published over the past 8
years – this is a huge body of evidence and is drawn from multiple lines of enquiry across multiple disciplines.

There is absolutely no doubt that increasing levels of carbon dioxide and other greenhouse gases increase global temperatures and no doubt that human activity has caused a huge increase in atmospheric GHG concentrations.

Jim Bertram quotes an article by emeritus professor William M. Gray disputing climate change, however it is important to note that professor Gray was never involved in climate change research but was an expert on hurricanes and tropical storms.

Scientists are humans just like the rest of us and are subject to the same weaknesses we are all vulnerable to, including ego, jealousy and greed.

It is not surprising that there are a small number of scientists who reject anthropogenic climate change, but they are not representative of the evidence on the subject.

Willem Van Dam has some good ideas about how CO2 emissions can be reduced. Our economies and societies have been built on fossil fuels and individual action is nowhere near enough.

We need systemic change to tackle the climate crisis. Governments should and already are introducing bans on sales of ICE vehicles in the near future. Building codes should be amended to require high insulation, solar panels and heat pumps for new buildings and to
prohibit any installation of new natural gas connections.

The number of flights does need to be reduced, and we should start with prohibiting
private jets and levying heavy taxes on the small number of people who take the majority of flights. But we also need government investment alongside this in areas such as high speed rail, cycling infrastructure, internet connectivity, and requiring crown corporations to manufacture and install the insulation, solar panels, and heat pumps.

Mr Van Dam also identifies a number of other crises that we are facing at present including housing, homelessness, drugs and debt.

We need to consider the root causes of these multiple crises, and the fact that we live in a highly unequal world where a small number of people control unimaginable levels of wealth
and the rest of us are fighting for scraps.

Thanks to the neo-liberal, free market capitalism that was ushered in 40 years ago by Reagan, Thatcher and Mulroney, capital has become ever more powerful at the expense of labour.

We are in the situation we are now thanks to unbridled capitalism and an unrepresentative democratic system. Unrestrained markets and continual economic growth are not the solution.

I get it, change is uncomfortable. Change is difficult. Change is challenging.

Its comforting to think we can continue to do things as we have in the recent past. But
change is also necessary and rewarding.

We need new economic and political models because the existing ones are not working and are threatening the continuation of human civilization.

We can either make changes now or have more extreme changes forced on us later.