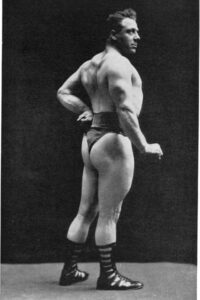 While George Jowett was not born in Dundas County, he did make it his home for most of his adult life. He certainly made Dundas County proud, as the Canadian Strongman. He has been a mentor and educator to many, and a promoter of physical fitness. His life story is very motivational, defying the odds from a child with physical handicaps, to the mentor of generations of a lifestyle of fitness and strength.

He was born in Bradford, Yorkshire, England in 1891. At 6 months of age, he fell from his mother’s lap on to a fireplace, and was injured. While it is not clear what the extent of the injury was, it apparently did result in numerous hospital stays as a child. At the age of 8, his parents were told that he might not walk, and he might not live past 15. When he was 11, an uncle took him to see a show featuring a strong man with the stage name of “Hercules”.

When he was told that Hercules, too, had a rough childhood but somehow managed to train past his handicaps, George was motivated to take the same path for himself. He began training. By 15, he was an international gymnastic champion. By the age of 18, he had won several titles for boxing and weightlifting in England. He understood the value of a good mentor and sound guided training. As such, he understood the potential for developing such programs himself, in order to mentor others. He initially moved to Europe to study further and, in 1910, at the age of 19, he felt the need to spread his wings and chose to immigrate to Canada.

How he ended up in Inkerman is a mystery, but he settled there and worked for 11 years as a blacksmith. He did take a 3-year break from that while he enlisted in the Canadian Expeditionary Force serving in the First World War, before returning to Inkerman. According to his attestation papers, he had married a local girl, Bessie Hilda Bouck, in October, 1913. They welcomed a daughter, Frances Phyllis Eliza, on April 30, 1916. While smithing paid his bills, George continued to augment his income in various ways. He performed as a paid “strongman” at local fairs and carnivals. He specialized in bending horseshoes and lifting barrels, and was later known under the stage name of “Young Hackensmidt”. Apparently, he also offered training sessions to youth who wanted to build muscle. This included a number of wrestlers.

By 19, he had made a name for himself and began writing and editing for Strength Magazine. In 1927, he established the Jowett Institute for Physical Culture. Under this umbrella, he wrote a number of small books with titles such as: “Nerves of Steele”, “Muscles like Iron”, and “How to mold mighty arms”. In the mid 1920s he relocated to the US where he had a controlling interest in several companies connected with body building. He co-founded the American Centennial Weightlifting Association and served as its first president. He developed and manufactured several lines of sporting equipment, as well as a line of bar bells and body building equipment. He also developed strength training programs. By the 1930s, he had offices in Australia, New Zealand, Europe, Britain, and USA. One of his most famous students was Johnny Weissmuller. For those who admit that they are as old as I am, they would recognize his name as the original Tarzan of Hollywood legend. 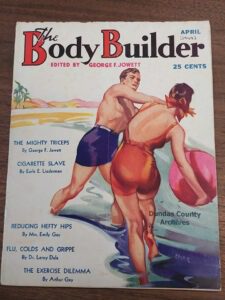 Unfortunately, in 1940 he was injured in an accident and broke his back. After being temporarily paralyzed, he did manage to recover the ability to walk, but he stepped back from his former life. By 1945, he had moved his family back to Dundas County. His focus then changed to local matters and community. The family also actively worked on restoring an old home that had been in his wife’s family since the Loyalist era. By the 1950s, his focus was on his home community and the Seaway Development. He was an elder of his church, and pivotal in the work to relocate the 200-year-old Trinity Anglican Church from its original location in the potential flood zone to where it is located now in Riverside Heights. In 1968, he was honoured with the Molson Trophy in Montreal, for a lifetime of contributions to the fitness and body building industry.

George Jowett died of cancer in Winchester on July 11, 1969. He left behind a legacy of works on strength building and physical fitness. He is buried at the Union Cemetery, where his gravestone reads: “a humble man who carried his meritorious achievements with dignity and thanksgiving.” That pretty much says it all. In 1997, his daughter donated his memorabilia to the Todd -McLean Body Building collection at the University of Texas. The Dundas County Archives has shared materials with them to build a small tribute to this wonderful man. Every now and then, we get an enquiry about his life and work. He impacted so many people’s lives and was a great mentor and community-oriented man.