Dog-strangling Vine is an invasive perennial herbaceous plant in the milkweed family. As you probably know, monarchs must lay their eggs on milkweed plants: common milkweed, butterfly weed, or swamp milkweed. The Dog-strangling Vine is enough like milkweed that monarchs end up laying their eggs on the plant, but the larvae cannot eat it, so they die. Given that the monarchs are a species at risk in Ontario, it’s another good reason to be vigilant against Dog-strangling Vine. What a name eh! It is also called Pale Swallowwort in the US. It can grow up to 2 meters. It grows very fast, and can change the microbial make up of the soil. There is no predator. Nothing eats it. It vines around other plants. It has little burgundy or brown flowers that give way to seed pods. Cut off any developing flowers and vines. Dig out the plants as you find them. Prevent it from flowering, so always remove the seeds. Do not ignore the plant. Botanists suggest repeatedly cutting the plant at the soil level, especially if it’s taken hold and is big. Ripping out a big plant will often just splinter it. Keep cutting the emerging vines….and do NOT let it go to seed! Many believe this to be the worst of the invasive plants, and while a similar argument can be made for most invasives, this is definitely one you need to watch out for!

Japanese Knotweed is an extremely invasive perennial herbaceous plant. It’s also known as Mexican Bamboo, Fleeceflower, Japanese Polygonum or Huzhang. As its name suggests, it is native to eastern Asia, including Japan, Korea, China, and Taiwan, where, surprisingly, it is relatively uncommon. It is one of the first species to grow on volcanic slopes, and as such has an important role in the ecosystem, just not in Eastern Ontario! Similar to many other invasive plants, Japanese Knotweed was brought to North America, in the late Nineteenth Century. It now has an aggressive hold in Europe, Australia, and New Zealand. It has been in Ontario since 1901, and can be found as far north as Thunder Bay. It develops large underground root systems, or rhizomes, which can dig up to 2 meters deep. A piece of rhizome as small as 1 centimeter can produce more plants within a week. It takes over an area, then stays. It destroys native plants, and it cannot support a diversity of species of birds, amphibian, reptile, or mammals. It can grow through concrete, damaging infrastructure extensively. If you find it, you can dig it out, or mow and cut it. It will keep coming back, so it’s an uphill battle. Tarping works, but beware of the extent of the root system. Make sure your tarp extends well past what looks to be the edge of the plant. It is not harmful to livestock, and they can graze on it in the spring.

Garlic Mustard is an adaptable, aggressive, biennial, herbaceous plant of the mustard family. It’s also called Hedge Garlic or Sauce Alone. It’s a European native, and is found from England to Italy. It was brought to North America through the 1800s as a food source, and also used for herbal medicine. As all the invasives, it escaped its confines, and took off. It is a seriously aggressive invader. You can find it throughout the temperate forests, agricultural fence-rows, rights of way, and all over gardens and lands. You can eat garlic mustard. It’s a pretty good tactic against invaders! It makes a nice pesto, or substitute for any other bitter green in a recipe or salad. (Check out eattheweeds.com for information on foraging, permaculture, and some other stuff!) Someone last year was suggesting sprouting the seeds. Although this sounds tasty, please do not do this! If it gets to the seed stage, you’re playing chicken with an aggressive invasive, and it will win! Garlic Mustard was first found in Toronto in 1879. It’s had a long time to become established. Like all the other invasive plants, it forms dense monocultures, pushing out native plants and animals. Invasives cannot support native animals, insects, fungi, and the whole host of living things that form a healthy ecosystem. The first year the plants look rather like Creeping Charlie, which is also invasive. The second year it will grow tall, flower, and eventually seed. Each plant produces thousands of tiny black seeds in pods. It can host some viruses like cucumber or turnip mosaic virus, cabbage black ringspot virus. Too much garlic mustard will taint the milk of dairy animals. My chickens loved it last year, and the eggs did not taste of garlic! Pull it out or cut it down. 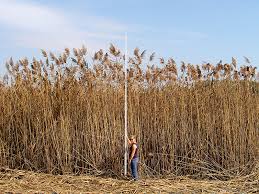 Phragmites australis is an invasive, perennial, wetland grass. The name Phragmites is derived from the Greek phragma, meaning fence, hedge, or screen. The invasive Phragmites release toxins into the soil from their roots that hinders the growth of nearby plants, and can even kill them. It originates in Eurasia, and arrived both through soil ballast and horticulture. It’s a good rule that, no matter how nice something looks, if it didn’t grow here before Europeans arrived in North America, it should not be grown here! In 2005 it was given the title of “Canada’s worst invasive plant” by Agriculture and Agri-food Canada. It is one of the biggest threats to Great Lakes coastal habitats. 25% of Ontario’s species at risk are directly harmed by invasive Phragmites. It has drastically reduced wildlife and plant biodiversity. Just like all invasives, it out competes native plants, and cannot support native wildlife. It has directly led to a great number of species being at risk. There is a variety of Phragmites native to the area, but they’re being quickly replaced by invasive ones. Native ones have a yellowish colour, whereas the invasives have a blueish tint. The leaves are much larger on the invasive and have red stems. The natives grow sparsely, in comparison to the invasives that grow in huge, massive, aggressively advancing stands. The invasives also have a much longer growing season.

ontarioinvasiveplants.ca have a huge amount of very useful information about invasive plants in Ontario, as well as extensive information on best management practices.

What are you growing, or planning for the spring? What kind of invasive species have you battled? Let me know at Joselyn@ndtimes.ca

Billowy stands of an Invisible Invasive