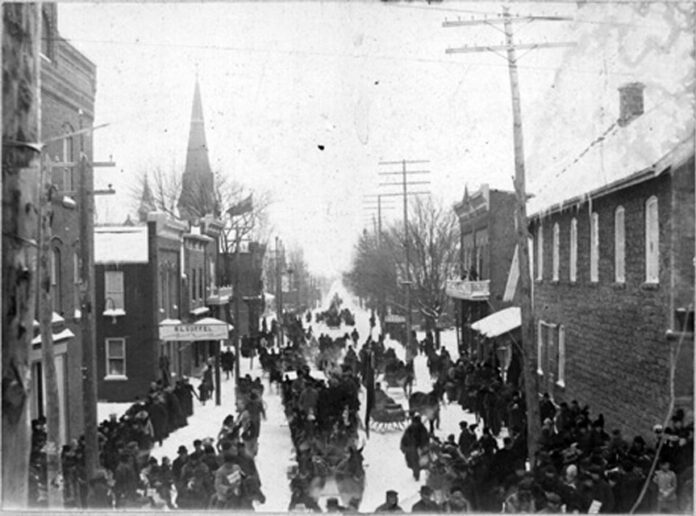 The Boer war in South Africa is long distant in our memories, having taken place half a planet away from Dundas County. Unlike more recent wars that took place in Europe or involved many more nations, the Boer War is a mere footnote. While most people have a beloved great uncle or grandfather who served in the World Wars, the memory of those events are well rooted in our own personal family memoirs, and entrenched in the history of our communities. Most of our local school curriculums merely touch on World War 1 and 2, they do not even mention the Boer War. There were, however, members of our communities who served in the South African War and they do deserve to be remembered.
First, a quick history lesson is in order, as not everyone is aware of the Boer War and its causes. Technically, what we call the Boer War was the second Boer War, also known as the Anglo Boer War, between the vast British Empire under Queen Victoria and two Afrikaner Republics in the Transvaal region of South Africa, the Afrikaner Republic and the Orange Free State. Essentially, the region was populated by refugees from Europe who arrived in the 1700s to escape religious persecution. The Afrikaners were protestant descendants of the Dutch, German and French, and had grown to appreciate their relative freedom to live their own lives. So, when in the 19th Century, the ever expanding empire of Great Britain came along and decided to rule the region, the Afrikaners were less than thrilled to submit to imperial rule. For a while, they attempted to establish an independent state, but when rich gold reserves were located in their region, the British were keen to gain control over these reserves. Needless to say, the Afrikaners were not keen to comply.

The British Empire looked for support from the various colonial attachments, and Canada was invited to support the endeavour with troops. This was the first foreign war to which the nation of Canada sent troops. It was the first time that Canadians distinguished themselves in a foreign battlefield. It also showed how Canadians could stand apart from the British Empire. Canada did generate a great atmosphere of patriotism, judging by the newspapers of the time, including newspapers in Dundas County. Canada sent several contingents to South Africa. The government uniformed them, trained them, provided supplies, horses and transportation. The cost of this endeavour was close to three million dollars, a huge investment for the time. Almost 7,000 troops left, including 12 nurses. 270 of these soldiers did not return. The numbers of horses who did not return was very high.
Twelve men volunteered and served from Dundas County. They all had roots and family connections in this county. J Lorne Bouck, of Morrisburg, was living in Montreal when the war was declared and answered the call to duty from there. He was part of the First Contingent. John Major was born and raised in South Mountain. He had joined the effort after he had attended a military school in Toronto and, in October, 1899 enlisted in the First Contingent. He saw service in South Africa and returned home in November, 1900. In 1902, he returned to South Africa for a second mission.

S. M. Liezert enlisted in 1901 in Cranbrook, British Columbia, but after returning from the war, settled in Vancamp. He served at the end of the war. A. E. Ault served with the Royal Canadian Dragoons and saw action in 44 engagements. James George Stephenson of Morewood, unfortunately, did not survive. After a year in the war zone he succumbed to enteric fever. The residents of Morewood have erected a monument in memory of him. G. H. Irvine of Hainsville was the first Lieutenant of the of the 6th regiment of the Canadian Mounted Rifles. Captain D. A. MacDonnell of Iroquois was a member of the second Canadian contingent. The Dundas County Archives is in possession of the large wooden trunk that he had taken to South Africa and returned home with.

Finally, Lorne Mulloy had enlisted from Ottawa, but was born in Mountain Township, and educated in schools in Morrisburg and Iroquois. Mulloy became the hero of the nation when he returned from the war, blinded in battle. When he returned to Winchester in December, 1900, along with Isaac Shea, a huge parade took place to honour them. He began a journey of lecturing to large crowds about his experiences in the war and instilling an aura of patriotism. In his words, “patriotic hearts beat strong and high”. This continued for the remainder of his life. He certainly served the county proudly.