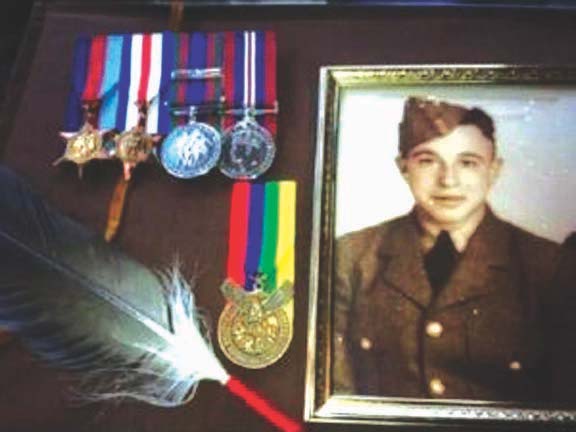 He was 15 years old. Too young to enlist, but yet he did anyway under a fake name. He did so alongside his lifelong best friend. They were trained to fight.

Prior to being shipped overseas, it was discovered that he was underage, however, by this point he was 17. The commanding officer approached the boy’s mother for permission, as the Canadian Government had already invested time into this boy and he was ready.

With strength from her young son, the mother reluctantly said “yes”.

The boy and his friend were shipped overseas and were in a wave that stormed beaches on June 6, 1944, D-Day. The 17-year-old boy made it through the initial gunfire and grenade blasts with his battalion and upon settling in a trench, he asked others where his best friend was. A soldier pointed to a lifeless body.

At that moment, that 17-year-old boy’s life was changed forever. He was sent to retrieve water for his troop while still grasping the loss of his “brother”. As he made his way across the battlefield, explosions continued to go off around him. He dove to the ground with the hope of hiding, when a voice spoke to him and told him to get up. As he stood, he was struck in the shin with large shards of shrapnel.

Maybe it was God, maybe it was his friend, or maybe a simple coincidence. Who, or whatever, it was, he was lucky, for if he had not have listened to that voice, that would have been the end of this young man’s story.

He was transported to a tent, then a hospital, and eventually shipped back to Canada, to his home and mother. When he returned home, it was without his best friend. A burden, a weight, a heavy heart, was carried from that day forward within this young man. He married the love of his life and they created 11 children; seven boys, and four girls.

Those children gave him over 60 grandchildren and great-grandchildren. He loved his life, his wife, his family, and his home. But there was always that heavy weight inside that he never expressed. And then a voice spoke to him — again— whoever it was, that gave him the idea and courage to act on a need.

He needed a way to heal, and knew that many others did as well at the time. And for many decades, this young man and his best friend were not recognized as Canadian Soldiers or “Remembered” at the typical services that are held on November 11 along with many others who shared his heritage.

And so it began. On November 11, 1995, the first Remembrance Day Service was held on the plateau of Mt McKay, the Sacred Mountain of the Thunder Bay area, in honour of Indigenous Canadian Soldiers and Veterans. Everyone is welcome but the focus is clear: Respect and Remember.

The young man passed on his 84th birthday on February 22, 2010. His name was Frank Banning.

No reconciliation without truth

Losers weepers – The Law of Nations