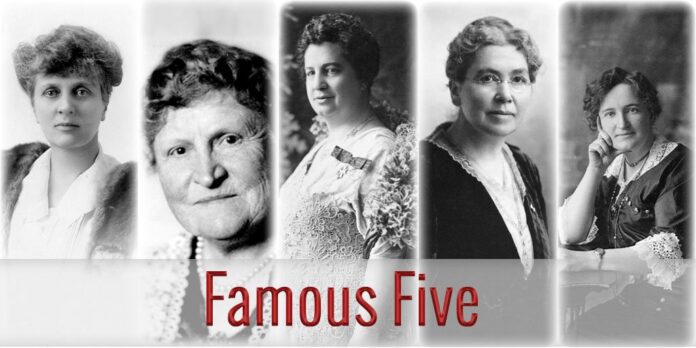 Every week, the Times is produced by a staff where women outnumber men by 2 to 1. Women have taken a leading role in every sphere of life, private and public. Much has been changed, and much remains to be achieved, as the articles in this special issue attest. On International Women’s Week, 2022, we can look back a century and see how much of the progress had to be fought for on every level, especially under the law.

Although Agnes McPhail was the first woman elected to the House of Commons in 1921, women were still denied the right to become a Senator, as the British North America Act of 1867 required that they be “persons”, which successive Canadian Governments had decided was a term that did not apply to women.

In August 1927, Emily Murphy invited four prominent women activists Nellie McClung, Irene Parlby, Louise McKinney and Henrietta Muir Edwards, to join her in sending a petition to the Canadian government regarding the interpretation of the word “persons”. These women are known today as The Famous Five.

On 27 August 1927, the Famous Five signed the letter, which was sent to the governor general.

In 1928, the Supreme Court of Canada ruled that women were not “persons” according to the  British North America Act (now called the Constitution Act, 1867). Therefore, they were ineligible for appointment to the Senate. However, the Judicial Committee of the Privy Council reversed the Court’s decision on 18 October, 1929. The Persons Case enabled women to work for change in both the House of Commons and the Senate. It also meant that women could no longer be denied rights based on a narrow interpretation of the law. They were now, legally and forever, “persons”.

It is in attitudes and behaviour that much remains to be done to bring true equality of opportunity. This is now a role where women and men can play a part to #BreaktheBias.