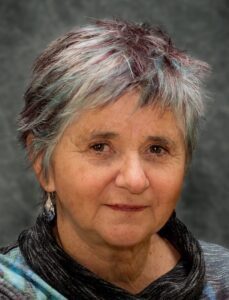 The young are born in the digital fast world. That’s all they know…until they spend time at grandma’s house. Here, they experience a whole different world: the garden, the orchard, the livestock, and responsibilities. One grandson had the task of gathering the eggs. The first day, he was so excited because he saw a hen lay an egg. Next morning, he was taking way too long in the hen house, so I went to check.  There he was, patiently and quietly standing still by the wall with his cell phone, waiting to video the laying process and send it to his friends in Alberta. Then came the day to have chicken for supper. I went with my other grandson to the barn to catch a young rooster. He said: “Grandma, I don’t eat rooster. I eat chicken.” I explained that, when he ate chicken, he often ate roosters. “Why don’t we eat hens?” he asked.

“Because hens lay eggs, and roosters don’t.” And his immediate response was: “I’m sure glad I’m a people.”

The children dug up potatoes and we turned them into french fries. They picked a butternut squash that they helped turn into a pumpkin pie. They are keen observers, and one of the three noted that pumpkin pie was very healthy, with all that squash, eggs and milk. It would make a good breakfast. They went through two 10-inch quiche size pies in one week. We picked apples for fresh eating, and some became apple crisp and apple pie. They snacked on small cukes and cherry tomatoes they picked in the garden and began to recognize the food bearing plants. They learned how to pick corn when it was the sweetest, cook it in the microwave with husk on. They have seen a broody hen teach her chicks how to survive, and witnessed the birth of kids.

Last year, I rented bicycles from Mr Cox in Winchester for their 2-week stay. It was good to see them play outside, climb the trees, jump on the trampoline, and bicycle in the area. In the evenings we played monopoly and rumoli. Yes, Grandma’s place is a different world.

I started a permaculture orchard where trees and shrubs are planted in layers. At the first tree, a black locust, I started explaining that it was there because it fixed nitrogen from the air and fertilized the ground around it. So did the lupins, and both bore scented flowers that fed the bees. My 12 year-old grandson looked at me and said: “Hang on grandma, I’m going to get my notebook to write notes”. He learned that blueberries and currants like to be in the acid soil near evergreens. He noticed that most of the blossoms on the chum tree had fallen without setting fruit. “That’s because the bees are dying. A lot of our food depends on bees.”

Last August, as we were on the deck pulling the elderberries off the stems to make syrup, he said: “Grandma, I’m really lucky.” “Why?”, I asked. The response I will never forget. “Because I get to spend time with you and know where food comes from.”

The grandchildren return home understanding that plants take CO2 from the air, water from the rain, energy from the sun, and turn it into food for us to eat. That it is all a very delicate balance, the miracle of life.

As rural grandparents, we have accumulated the wisdom of life’s cycles, and sharing it with the next generations who are detached from the land is very important. They, indeed, need to know where food comes from. Don’t underestimate your value.

Why doesn’t she just leave?