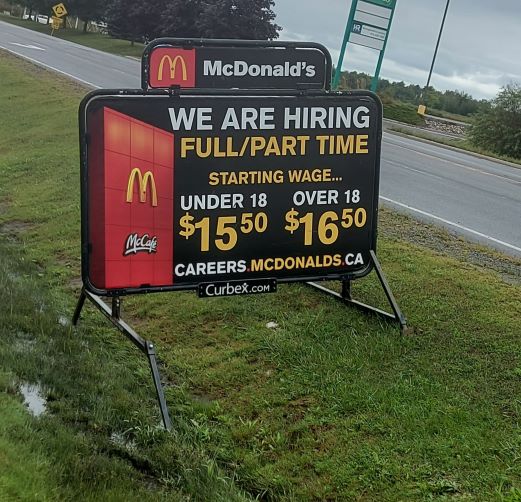 The current labour shortage affecting most of the country is causing many employers to raise their starting wages in desperation, making this an excellent time for prospective workers to go job hunting. Some large companies have been vocal in recent years about potential negative effects from minimum wage increases, though even massive, time-tested corporations are starting to raise their starting salaries above minimum wage in order to recruit and retain staff.

Locally, the new Wendys location and existing McDonalds location in Kemptville are both offering above minimum wage to start, even for non-supervisors. Roadside electronic signage, which was originally installed to advertise menu items, now often flashes with bold messages of “now hiring”. At one chain restaurant location, there was a sign offering an upcoming “hiring day”, with interviews given on the spot.

To the east, the Walmart warehouse in the city of Cornwall is advertising not only a starting wage of $18.90 per hour for new labourers, but also a $3,000 signing bonus.

What do these wage hikes mean for employers, employees, and the public? Paying out higher wages will undoubtedly affect different companies’ finances differently. From a learning perspective, many corporate decision makers may come to place more value on their workers as a result of the current competition for employees in the market. For employees, wage increases can mean nothing but good news, not only because it means they make more money, but also because it represents a certain desperation in the search for employees which is bound to motivate employers to make other positive changes to the workplace climate as well.

While the increase in worker wages is becoming far more pervasive lately, this is not a new reality. In March of this year, a CBC report predicted that wages would skyrocket in 2022 as a result of the labour shortage. “In this job market, if you’re not getting a raise, it’s time to change jobs, because chances are it will pay more,” reads a line from that report.