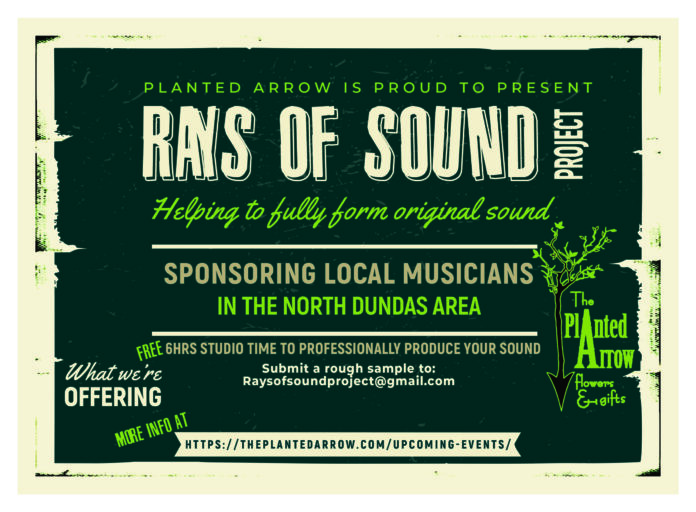 For business owner Kelly Windle (owner of The Planted Arrow in Winchester) along with her husband Stefan Kuhot, supporting local musical artists has become a priority this year.

The arts are very important to them, and they want to support local talent by funding professional studio time.

This means pairing up with well-known music venue, Vibration Studios in Osgoode (https://vibrationstudiosinc.weebly.com), who supported the initiative immediately.

Originally, artists were going to be given three hours of studio time. Vibration Studios bumped that up to five hours with a professional producer in a top of the line studio. Kelly and her husband are so grateful to have made this incredible connection. Who was the inspiration behind this initiative?

Esi Edugyan. She wrote the novel, Half‑Blood Blues. She described her process as writing while listening to the music of the time to aid her in setting the stage for the reader. The music helped her get into the minds and shoes of the characters she wished to convey.

Music was a window into the past. Into a moment. A feeling. An idea. We wanted something like that for our region. Something that would say, this is what some of our locals are saying with sound in this moment, so that in the future someone could listen to our sound in one moment or another, and get a deeper sense of what it was like to be us.

Then Covid hit and venues shut down. Artists couldn’t perform. Their livelihoods were at stake. We found ourselves, fortunately, still above water, even with the wedding season completely gone,” said Stefan.

Enter the “Rays of Sound” project. How does all this tie into Kelly’s other business, The Planted Arrow?
“An artist creates. We’ve been creating beautiful transient pieces to add to moments. Sound is another artistic medium that layers onto the moment. Have you ever fully taken in a bouquet while blasting Tchaikovsky‘s Russian March? Start at the base.”

The Rays of Sound has been posting its studio time winners each month on its Facebook page, and have been very happy with the outcome.

There have been many soulful submissions with not much heavy metal music so far. No discrimination, just a well formed sound that could benefit from some professional studio time.

Artists can submit their sound to: RaysOfSoundProject@gmail.com.