by Gary Boyle – The Backyard Astronomer

For obvious reasons, winter in Canada does not entice people to venture outdoors to stargaze. The nights can be long and cold, but can also be a thing of beauty. Your reward for braving the frosty still of the night is seeing the most iconic constellation of the entire sky. The seven bright suns that form Orion the Hunter is part of the larger picture of a dozen bright winter stars belonging to other nearby constellations. 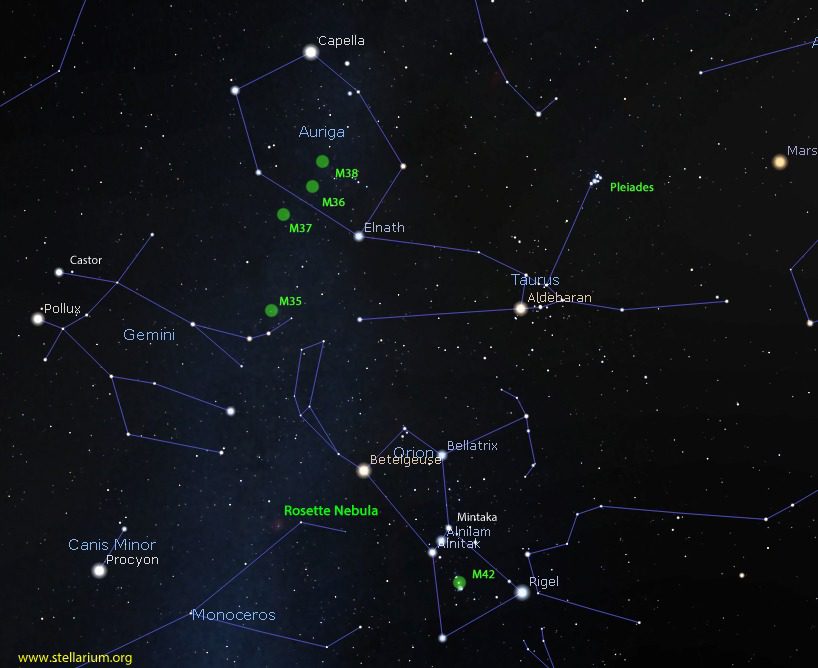 Of course, we can look through the window from the warmth of our comfy homes; however, to experience the true wintry celestial landscape, bundle up and, if you can, travel to a dark site away from stray light sources on a moonless night. Here, the ghostly silence of the night allows one to hear their own heartbeat. Along with seeing imaginary Taurus the Bull (to the upper right) while battling Orion, look at the beautiful Pleiades star cluster, the heart of the angry bull. Also referred to as the Seven Sister, the Pleiades resides about 450 light-years (ly) from us.

To the upper left of Orion are the Gemini Twins consisting of the bright stars called Pollux (yellowish) and Castor (blue), located 33 and 51 light-years respectively from us. Use binoculars to locate a beautiful open star cluster catalogued as M35 near the right foot. Appearing about the size of the full moon, the cluster containing a couple of hundred stars is some 2,800 ly away. Above the Twins is the constellation Auriga the Charioteer. The bright star is named Capella and resided 42 ly away. There are three open star clusters located in the southern part of the constellation. Appearing in a somewhat curved line from left to right, they bear the catalogue numbers M37, M36 and M38. They are all in the 4,200 to 4,500 ly range from us, meaning the starlight from these clusters left around the time the Great Pyramids in Egypt were built.

The winter sky is also where we find the fainter and less dense edge of the Milky Way Galaxy on the left side of Orion. Opposed to the heavy concentration of hundreds of millions of distant stars signifying the centre of the galaxy in the constellation Sagittarius seen in the night sky from in the south from June to October, dark skies are required to see the winter portion of our galaxy.

Focusing now on the main pattern of stars, the hunter is outlined by two stars for his shoulders, two for his feet, and three in a row for his belt. From the belt, look for the imaginary sword hanging down with a fuzzy-looking object in it. Welcome to an emission nebula called for obvious reasons, The Great Orion Nebula, or simply M42. This stellar nursery is slowly collapsing and condensing pockets of gas and dust in the nebula to eventually form a couple thousand stars. The belt stars from left to right are named Alnitak 817 ly, Alnilam 1976 ly, and Mintaka 916 ly, while the nebula itself is around 1,500 ly away.

Embrace the night sky for all it has to offer, no matter what time of year.

Till next time, clear skies.

Known as “The Backyard Astronomer”, Gary Boyle is an astronomy educator, guest speaker and monthly columnist for the Royal Astronomical Society of Canada. He has been interviewed on more than 50 Canadian radio stations and local Ottawa TV. In recognition of his public outreach in astronomy, the International Astronomical Union has honoured him with the naming of Asteroid (22406) Garyboyle. Follow him on Twitter: @astroeducator or his website: www.wondersofastronomy.com.