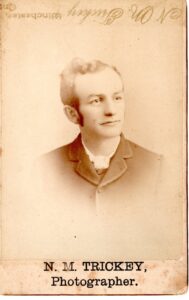 Norris Trickey was a photographer in Winchester between 1890 and 1912. That is an incredibly long career in this rapidly changing field, especially when you compare it to other contemporaries who were often only in the business for a year or two. Like many others in the late 1890s, he diversified. He was a photographer and barber. When one looks at directories in the time of the latter 1890s, people who identified as cabinet makers often also diversified to sell groceries, hardware or even coffins. In Dundas County, there were also those who were cabinet makers and operated funeral homes. So, when times were challenging economically, taking on two professions was certainly not unheard of.

It would be important to focus on the type of photography he was noted for. In the evolution of the photographic arts, it was still a rare thing to be able to get a portrait done before the 1860s. Photographers did exist but they were expensive. It was fairly new technology. The early equipment was cumbersome and expensive as well. Photography came into popular knowledge by the work of Matthew Brady who photographed images of the Civil War in USA. These images brought to life the horrors of the war and gave the public a view of how horrific these battle fields were. It was the beginning of photojournalism.

It had been popular for soldiers to be able to carry to the battlefield a portrait of their loved ones, so this is another way in which the Civil War created a market for photography. The earlier form of photographic print, the daguerreotype, was available as of the mid 1840s and was used until it was replaced by the ambrotype, which was common in the 1850s to 1880s. Daguerreotypes were the first commercially processed forms of photography in North America. They were a highly polished silver surface on a copper plate. The images were developed with mercury vapour and iodine fumes, both highly toxic. This may explain why many early photographers did not stay in the business for long. The Ambrotypes were small prints from a negative. They were usually mounted on a protective card. This was followed by a Tin Type from the 1850’s into the new century. An image was created on a very thin tin or iron plate and coated. Most of these were small, approximately 2 inches by 3 inches. While most would originally have been given a protective pressed board cover, most of those are gone now as they did not preserve well. Many surviving prints also have rust spots and flaking emulsion layers.

The type of photograph which was created by Norris Trickey was known as a cabinet card. A Cabinet card was developed after the earlier Carte De Visite. These were usually formal portraits mounted on a strong pressed board card, they were albumen prints in sepia tones. The size of the carte de visites were 3.5 by 2 inches on a board mount. By the latter 1880s, the Cabinet card had generally replaced these. The photographer would have a logo, or his name emblazoned on the back of the print. This is how we know the format that Trickey used. The Dundas County Archives has a small collection of such cabinet cards, including one which is a portrait of the photographer himself. They are all the larger Cabinet card format.

Trickey advertised in the Winchester Press throughout his time in Dundas County. In early directories, he was identified as a photographer and barber. In the 1893 Ontario Gazetteer, he was still identified as both. In 1898, he stated in an ad in the Winchester Press that he was a photographer with a Gallery in Winchester adjoining a tin shop. He no longer advertised his Barber business. He sold cabinet photos for $1.75 per dozen. The same ad was continued for several years. By 1901, he was advertising a studio in Chesterville. But he also stated that he was the Agent for Cornwall Laundry and Dyeing. The Story of Dundas in 1905 clearly states that he was a photographer, with no mention of any other occupation. By 1912, the Winchester Press advertisement had changed for Trickey Photography. They stated that they made photos that are “nobby [sic] and up to date” and that they used “nothing but the best of everything to obtain this result. Special attention given to babies”. They also did picture framing and developing of film. It is anyone’s guess as to what “nobby” meant.

Unfortunately, we know extraordinarily little about this man who worked so long in this field. A little sleuthing did result in a few snippets of information about him. He was born about 1855 in Marllorytown. He still appears in the census in Leeds county in 1871, but by 1876 he is in Winchester for the birth of his son Edmond. The same year, he married 22-year-old Sarah Gibson. A few years later followed Marity in 1881, Charles in 1883 and Julia in 1891. They were all born in Winchester. The trail then leads to Saskatoon in 1916. His wife Sarah died in Saskatoon in 1941, in her 86th year. His trail then led him to Vancouver. He died in Vancouver on November 14, 1949. His obituary stated that he had been a resident of Saskatchewan for 27 years. He operated a photograph studio there until 1938. He apparently moved to Vancouver to live with his daughter. He did leave behind a legacy of his work in the family heirloom collections of Dundas County.