Those who know me well know that I have spent many an hour deep in research of the history of slavery in Kentucky. My particular focus has been in slavery in the 1840s in this region. In fact, I moved to this area from Kentucky. So, it certainly spiked my attention when I learned all those years ago that a fugitive slave from Kentucky had made their path to Dundas County. It was about 25 years ago that I had learned that a descendant of Isaac Johnson was hosting a talk on his history. I was keen to learn more. After meeting many of his descendants that day in Waddington, New York, I learned to have the deepest respect for this man. It appears that I am not at all alone in this view. The Adirondack Architectural Heritage group (AARCH) has organized tours from New York State to visit the buildings connected with Isaac Johnson. They had planned to visit this past summer, but the tour had been cancelled due to the border closures and the COVID 19 shutdowns.

I was approached because I manage the Dundas County Archives, to see if I knew anything about his story. Long before the Dundas County Archives was even imagined, I had collected materials by and about Isaac Johnson, and I happily shared this with the group. There is a special feeling when a history-oriented person connects with like-minded individuals in a search for details. When these details pertain to an individual in the past, it is akin to finding the elusive treasure.

Who was Isaac Johnson, and how did a former slave from Kentucky end up in this area? How do we know about his story? In 1901, Isaac Johnson wrote his memoirs: “Slavery Days in Old Kentucky: a true story of a father who sold his wife and four children. By one of the children”. 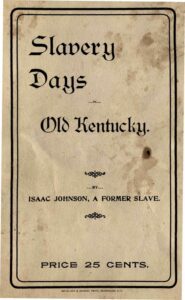 According to the descendants, he wrote these memoirs as a means of raising funds to provide for his children after he had been injured on a stone mason job. By this time, he was living in Ogdensburg and working between Ogdensburg and Massena, New York. He had also hoped that by sharing his story, he might be able to find his long-lost siblings from Kentucky. While this memoir did raise the desired funds for his children’s education, he was never successful in locating any of his siblings.

He also wanted to illustrate the history of slavery, and how it impacted on those who experienced it. This book also served as a window into the world of Isaac Johnson. We learned about his origins as a child of a white father and enslaved mother. His mother was born in Madagascar and taken into slavery there. She became a servant to a slave trader until his death. At that point, she was inherited as property of his eldest son. Richard Yeager was a tobacco farmer in Nelson County, Kentucky.

According to Isaac, they lived together on the farm as husband and wife and had four children together. Isaac was born to this family in 1844. All was normal until he reached 7 years old. His father must have had financial difficulties. The fact that the neighbouring farmers shunned him may have been an issue. Whatever the cause may have been, the fact is that Richard Yeager sold his wife and children into slavery for a total of $3,300, a sizable sum in those days. Isaac was the property of William Madinglay for the purchase price of $700.

My former research on this topic indicates that this was a significant price for a child in those days. Isaac laboured on Madinglay’s farm for the next 12 years. As was the case with many slaves during the Civil War, he escaped to the Union Army when they swept through Kentucky. He was enlisted in the 102nd US Coloured Regiment on February 3, 1864, and served out the Civil War. When the war ended, he searched Kentucky for his lost family members. After he gave up on the search, he found his way up the Great Lakes and the St Lawrence River, working on cargo ships.

By 1867, he reached Morrisburg. It is not known why he chose to settle in the area, or how he became a stone mason. Likely, he went where the opportunities presented themselves. He worked for Baker Limestone quarry in Winchester for about 8 years, learning the craft while working on the construction project for the United Church in that town. He is associated with several other construction projects, including the St James Anglican Church in Morrisburg. He also built stone houses in Winchester and Russell. He took contracts on the New York side of the St Lawrence also, in Waddington and Ogdensburg. His construction days ended in 1893 due to an accident. It was at that point that he decided to pen his memoirs. They were republished in 1994, with additional research by Cornell Reinhart about his legacy in Ontario and New York State, thus bringing his incredible contributions to local architectural heritage to a new generation.