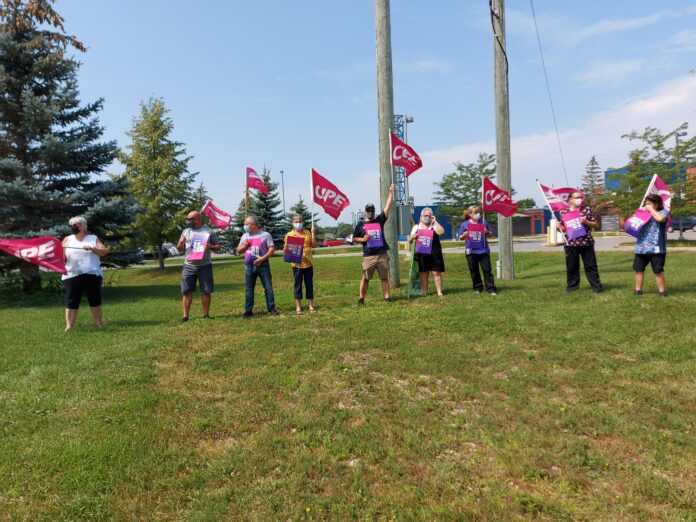 Staff from the Winchester District Memorial Hospital (WDMH) took part in a midday rally on Tuesday,August 10, to protest what they are calling unfair concessions on wages and rights that are being proposed by Doug Ford’s Progressive-Conservative government.

Hospital staff and representatives from the Canadian Union of Public Employees (CUPE) local 3000 held union signs and provided a presentation to inform the public of the unwelcome changes to Ford’s policies in the late stages of the COVID-19 pandemic. The group is fighting against changes coming with Bill 124.

CUPE 3000 President, Jackie Imrie, spoke to the Times at the rally. “The hero days are gone,” she lamented, referring to the government’s support of health care workers during the pandemic. A CUPE leaflet distributed at the rally discussed the unfairness of the government attempting to make concessions during bargaining, considering that hospital staff faced challenges, such as poor access to N95 masks, during much of the pandemic.

“We can’t accept that your reward is to go backwards,” reads the leaflet, directed toward members of the union.

The key issue in the bargaining process between CUPE and the Ford government is a list of concessions that union members are being asked to accept. Louis Rodrigues, Vice-President of the Ontario Council of Hospital Unions of CUPE, sent a statement to the Times outlining some of the union’s primary concerns.

It lays out many policy changes, such as less emphasis on seniority, a removal of access to exit or retirement packages, and a wage increase cap of 1% per year for three years.

The statement – which was originally sent to union members – begins with a thank-you message to staff for sacrifices they have made during the pandemic, such as weekends spent away from family, mandatory overtime, re-deployment to retirement homes during outbreaks, and cancelled vacations.

A central discussion at the rally was the 1% cap on wage increases. The CUPE leaflet reads, “The Ford government has passed legislation to limit wage increases for 3 years to 1%. Inflation is 3.6%. This would mean a 2.6% cut to wages in the first year alone.” However, the union is asserting that it will not budge.
“The union will not accept concessions in bargaining and will push Ford on wages,” the leaflet reads.
The rally took place from 11:30am to 1:00pm, with many hospital staff joining briefly on their own time during their lunch break.