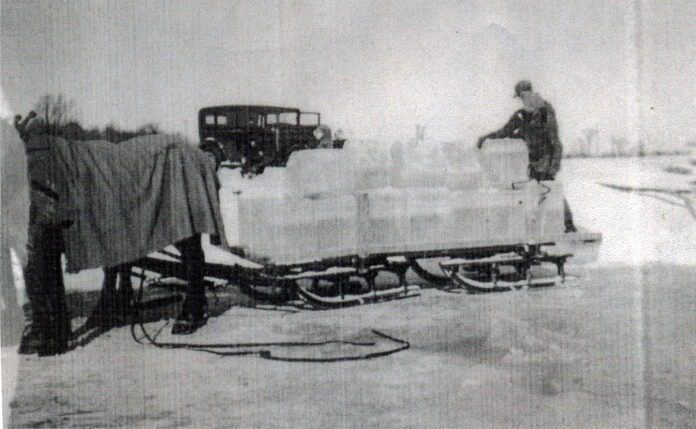 This was a time before electrical power was available in our area. Electric service arrived in 1949. Every winter, we drew ice form the Ottawa River near Petrie Island. We drew ice until our ice houses were full. This could take several weeks with team and sleigh. My brother Albert and I each had our own team and sleigh. His team of horses were named Nancy and Posie. Birdie and Barney were mine.

We filled our icehouse and our brother Arnold’s icehouse. This was an extremely cold job. Icicles hanging from the horse’s noses could grow 7 to 12 inches in length. The horse blankets were folded on top of a block of ice to sit on. I wore a lot of clothes, with a scarf covering my face and forehead, only my eyes were visible. I wore flight boots with lots of socks.

Dad and Albert had to pull each block off the sleighs and up into the ice houses with tongs and rope. I took care of the horses. The sawdust from our sawmill was shoveled onto a sleigh and taken to the ice houses. There it had to be shoveled off on top of each layer of blocks and between the blocks. This kept the ice from melting all summer and, also, from sticking together.

When a block was used, it had to be pulled out from under the sawdust and thrown out of the icehouse unto the ground. The sawdust had to be washed off with water. The block was chopped with an axe, or sawed with a cross-cut saw into large pieces. The ice was put into the water tank to keep the 30-gallon cans of mild cold until they were taken to the cheese factory, Martin’s cheese factory at the corner of Innes Road and 8th Line Road (Frank Kenny). Later, the 8-gallon cans of milk were shipped to a dairy in Ottawa. Also, ice was needed for the icebox in the house. Some farmers did not ship milk, they only shipped cream.

There was a lane between two farms from Old Montreal Road to the Ottawa River. Snow was shoveled onto the pavement of the Old Montreal Road. This was done so that the heavy ice-loaded sleighs could cross more easily and proceed straight up Russell’s Hill, which was quite steep. This road was named Navan Road North (today’s Tim Road).
The sleighs had a “dog” which dragged behind. It was attached between the rear runners. On straight and level roads, the “dog” was set on a runner. This allowed the sleigh to be maneuvered in reverse directions. The “dog” dragged behind on roads with hills. If the horses were not able to hold the sleigh from sliding backwards, the “dog” would dig into the road surface to help hold the load. This allowed the horses to regain their footing and their pulling power.

We lived and farmed between the 7th and 8th concessions North, which is now Frank Kenny Road.

The words that I wrote above, depict part of my life when I was working on the farm.
[Used by permission, the Cumberland Historical Society]