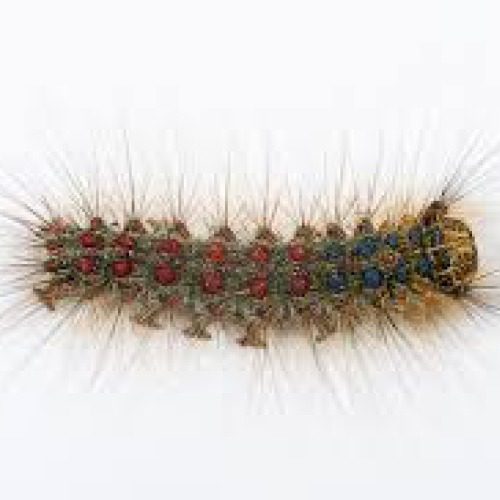 Anyone who pays any attention to trees at all has noticed the destruction caused by the gypsy moth.

This is year three of a particularly bad invasion. It is the larvae stage that does the damage. The Caterpillars. They prefer oak, and other hardwood, but when they’re hungry they will eat anything.

Entire stands of old oak have been entirely defoliated, but they’re currently munching their way through deciduous and conifers throughout eastern Ontario. Accidentally introduced in the 1860s, there have been periodic outbreaks since, often in 7 to 10 year cycles, usually ending with an overabundance and a population collapse. That hasn’t happened yet, and this outbreak shows no signs of abating.

The caterpillar is 5 to 60 mm long and covered in hairs, which can cause skin irritation in some people. The hairs also make many birds wary of snacking on them. Blue Jays, orioles, chickadees, and black and yellow billed cuckoos are five birds found in Ontario that do eat them.

Another reason to encourage birds to your yard! One female lays one egg sac in a mass on a tree trunk in late July and August. Sacks contain 100 to 1000 eggs, are 4 cm long and tan in colour. They hatch in early May and start climbing trees to munch on the canopy. In the 40 days they spend growing, munching, and moulting, one caterpillar can eat a square meter of canopy.

The caterpillars climb up and down the tree, and travel via threads carried on the wind. From mid July, at 6 to 7 cm they cocoon for 2 weeks, hatch in late July or August, live for 10 days, lay more egg sacks for next year, and die. The female moth is larger, white, and flightless. The male smaller and it flies. They don’t eat anything as moths. The egg sacks overwinter, and the cycle begins again the following spring.

The fungus Entomophaga Maimaiga exists as resting spores on tree bark throughout the winter, germinating into sticky spores in the spring, where it digests its way into the caterpillars on contact. It kills the caterpillar, turning the decomposing carcass into microscopic spores that spread. Unfortunately, this fungus relies on specific moisture levels and temperatures in order to germinate.

In short, the conditions required to affect a collapse of the gypsy moth population are not occurring. The MNRF monitors gypsy moth. The forecast for this year and next is frightening. Ontario has not introduced any predators.

What can you do aside from helping to mitigate the causes and effects of climate change? Removing egg sacks from trees will reduce the population a bit. Drop them on the ground where they’re eaten by small mammals or put them in a bucket of soapy water. Wrap burlap around the trunk of trees.

The caterpillars hide under the burlap during their travels up and down the tree, where you can remove them. Strong trees can withstand an assault a bit better, so water and feed trees, and don’t stress their roots with digging or crowding.

Trouble is, a tree can only withstand so much. A healthy oak will not succumb to one year of infestation if it has a stress-free year following. A deciduous tree can often re-foliate a bit in later summer to keep it going through the winter. A coniferous tree cannot. Some people spray Bacillus Thuringiensis – Kurstaki (Bt-k). It’s a natural soil-borne bacteria. It is toxic to the larvae stage of some insects.

Butterflies such as monarchs that hatch later in the year are generally safe from it, but many of the less gorgeous, but equally important moths and butterflies aren’t. Bt-K is what some landowners spray aerially.

You can maintain a garden that supports birds and beneficial insects. Check out BirdGardens.ca for suggestions. Parasitoids refer to some species of wasps and flies that lay their eggs in the body of a host, such as a gypsy moth caterpillar. The larvae stage of these parasitoids kill the host.

Please do not kill insects indiscriminately in your gardens, as many of them help control infestations of other insects, and are harmless to us. A few of these wasps and flies have been introduced into the north-eastern US to help control gypsy moths. Other insects prey on gypsy moths, including predatory stinkbugs, ants, and spiders.

Drought conditions currently in South Nation, Eastern Ontario, and beyond