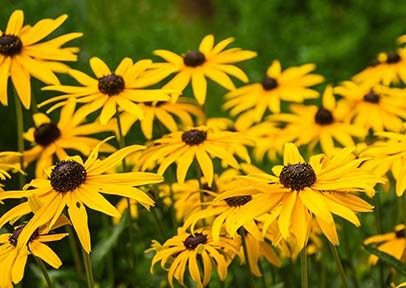 When you are starting seeds, buying annuals and perennials at the nursery, or choosing which trees to add to your garden, consider sticking to native plants. Native plants support and attract native wildlife. They often require less care than non-native plants, are better suited to the area, and more able to withstand the changing climate. They cope better with the variations of the local landscape, have natural defenses against pests, and contribute to the complex ecosystem of the area. Often, when a native plant disappears, a native animal or insect will disappear too. Native plants encourage and support biodiversity.

The Monarch and the Karner Blue butterfly are two examples of reliance on native plants. The Karner Blue butterfly needs the wild lupine, which is increasingly hard to find. The Monarch needs milkweed, which is also being destroyed through development, monoculture, and non-native and invasive species. Many of our invasive plants were brought to Ontario to look good in gardens. Two examples are periwinkle and goutweed. Both were brought here as ornamental garden plants, and both take over gardens and wild areas, quickly pushing out native species.

Choosing native plants over exotic ornamentals encourages and sustains biodiversity, which is the number and variety of living things in a specific area. We need to make even our developed areas, such as our communities or back gardens, hospitable to native wildlife. Native plants naturally occur in an area, and can support much more wildlife. Native birds live off of native insects, which live off of native plants and trees. Importing a tree or plant from a different part of the world does not contribute to the ecosystem that the birds and other wildlife need to survive and thrive. Native plants are often healthier and stronger, meaning that you spend less time and money taking care of them. You don’t have to pollute the environment with large quantities of fertiliser, or pesticides.

Native plants in Ontario are those that existed within a region before Europeans arrived. They include grasses, ferns, perineal and annual flowers, trees, vines, and shrubs. Nurseries and seed catalogues are increasingly stocking native plants, and there is a native plant for every space. Instead of using Goutweed or Periwinkle as a groundcover, try Wild Strawberry, Wild Ginger, Wintergreen, Mayapple, Bunchberry, Running Euonymus, Foamflower, Bearberry, or Wild Geranium. Ornamental grasses are attractive garden additions, providing height and interest. Instead of choosing Miscanthus grasses, such as Chinese Silver Grass or Zebra Grass, which are native to Africa and Asia, choose one of the native grasses that are attractive and help support native biodiversity. Examples of native grasses that work as ornamentals are Indian Grass, Switchgrass, or Big Bluestem.
Norway Maples have been planted throughout the region because of their dense foliage, despite the fact that both the Sugar and Silver Maple are native species. You can also choose from a variety of Serviceberry bushes, or a Hackberry tree. The Russian Olive tree or bush has long been used in landscaping because it is tough and durable. You could, instead, use Witchhazel, which grows the same size as the Russian Olive, but is native and has flowers that bloom in Fall. A Chokecherry tree is a good choice too, providing fruit for birds and flowers for butterflies and bees. Alternate-leaf Dogwood is also a good native choice. Instead of buying an Autumn Olive, try a Common Ninebark, Grey Dogwood, or Eastern Redbud. The non-native Bush Honeysuckles, the Tartarian, Amur, Morrow, Bells, and European Fly Honeysuckle, all hail from central Asia and the mountains of Europe. Instead, try Nannyberry, Red-osier dogwood, or Native Bush Honeysuckles. The Multiflora Rose is pretty, but can become invasive, and it’s native to Japan, not Ontario. Try a Common Elderberry, Wild Roses, or a Flowering Raspberry. Japanese Honeysuckle Vine can kill trees by blocking out all the sunlight, or toppling them over. Try climbing Hydrangea, American Wisteria, Goldflame Honeysuckle, or Jackmans Clematis.

Luckily, some of the nicest perennial flowers are Ontario natives. Black-eyed Susans, Swamp Milkweed, Fireweed, Wild Quinine, and Blanketflower or Gaillardia are all easily found in nurseries or grown from seed. Bee Balm, Butterfly Weed, Purple Coneflower, or Blue False Indigo. Choosing native plants does not mean your garden needs to be boring!
Do not go out and cut down your Norway Maples and dig up all your periwinkle. But, when you have the opportunity to add a new tree, or replace a dying one, possibly replace the Norway Maple with a Sugar or Silver Maple. Contain the periwinkle, and when you rip out dead sections, replace with wild geranium, wild ginger, or wild strawberries.