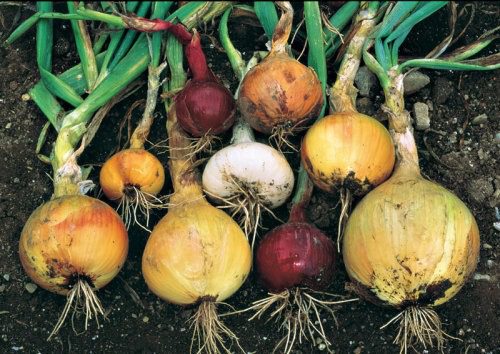 I forgot the onions!! Digging through my big bag of seeds last week, I realised that I’d forgotten all about onions! Onions are very important. There have been riots over onions. That is not hyperbole. The Indian Onion Crisis of 2010 saw 20,000 demonstrators take to the streets of New Delhi, India, when abnormal weather led to a shortage of onions, and an ensuing drastic price increase. Far from being an isolated incident, onion prices and shortages were blamed for bringing down the central government in 1980, and decided the outcome of elections in the states of Delhi and Rajasthan in1998.

Although Canadian politics are unlikely to be overly influenced by onion shortages and prices, onions really should have been at the forefront of my gardening brain in February!

There are a couple of ways to grown onions in our area. Many people plant onion sets that they buy at the local garden or feed store. They are tiny onion bulbs, grown from seed the previous season, then shipped to the garden or feed store. They are pretty easy to grow, and pretty foolproof, so you’re very likely to get a decent harvest of onions if you plant sets. They like full sun, and well drained soil. Your local garden or feed store mostly likely stocks sets of a variety of onion that does well in the local area. Your choice of sets may be limited to two or three varieties, which is fine for most gardeners. Sets stocked by local stores are often varieties that will store well after harvest, providing you cure them properly.

You can also grow onions from seed. It’s generally cheaper, and you can often get seeds for different varieties of onions that you wouldn’t be able to find in sets. It is possible to grow many onion starts from seed in a very limited amount of space, so if you are short of money or space, or you just want to try something new this year, why not try growing onions from seed. Generally, seeds should be planted 10 to 12 weeks before you can put them outside, so if you’re considering it, there’s not much time to waste!

You can plant seeds in a seed starting mix or a soilless mix in February. Onion starts can be planted out before the last frost, so you want them ready to go outside before the tomatoes, peppers or eggplants. The seeds can be planted quite close together, as long as they are in a container with lots of room for their roots to go deep, and keep your eye on them regarding water. You can put them in individual seed-starting cells, or you can start a lot of seeds in an old mushroom container. They don’t generally need a heat mat, but they do need light. The idea is to grow healthy and vigorous tops with well-developed roots to plant out once you can work the soil outside. Many people trim the tops off of the shoots before they get too long, in order to keep the plant short and bushy, and allow them to develop good root systems and strong leaves.

When you plant them outside, choose an area with well-drained soil, and full sun. Some well-aged compost will help them along, ideally dug into the soil prior to transplant. Plant them 3 to 4 inches apart, or more for big varieties. It is best to stop watering in August to allow bulbs to finish off in dry soil, but that is dependent on the variety of onion, as well as the weather we have had through the summer. Tops will begin to fall over. You will most likely have to push some of them over after waiting a while. Onions require curing before storing. Most varieties can be cured in the sun after harvest as long as they are protected from rain, and dew. There are some onions that just don’t store as well as others.

Generally the strong flavour ones store the best, and the sweet ones not as well.