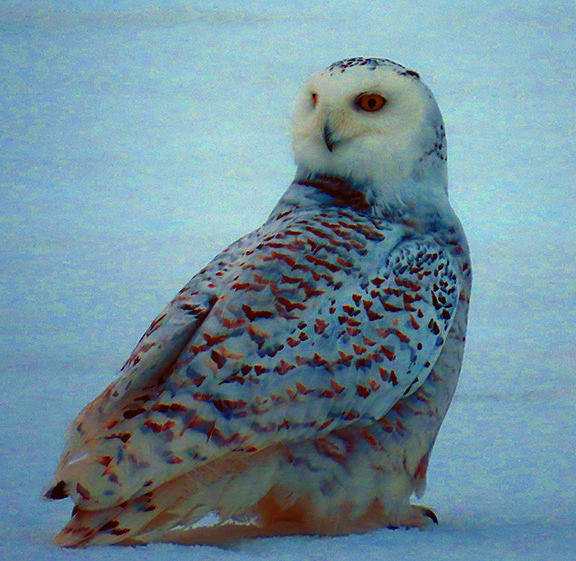 I hope that you are all fit and well and looking forward to longer and warmer days ahead.
Having reached the bottom of the very large bag of Nyjer seed, feeding our numerous bird portion of the Redpoll irruption, it was time to restock again. Local suppliers were out, so a trip a little bit north of here was required. A brilliantly sunny, but extremely cold, windy day prompted me, as I was going that way, to try my luck at seeing a Snowy Owl and Snow Buntings once again. So, with that in mind my camera was soon nestled behind my driving seat, in silent expectation.

Once the Nyjer seed had been purchased and stowed I was off to try my luck, again, Snowy Owl seeking. As luck would have it another car was just passing by, on the road where a sighting might have been expected, and an enthusiastic head popped out of the car window, to direct me to a Snowy Owl location, where it was supposedly sheltering from the wind, on the ground, by a fenced hedgerow, not too far away.

A first scan with my camera’s zoom lens didn’t really show it up, as, being white and well camouflaged, it didn’t stand out one bit. Surprise,- surprise! I was feeling a little bit frustrated about this situation, when another car drew up and the gentleman in it, with his powerful binoculars, was able to zero me in, on it, straightaway,- success! The owl, looking like a small mound of snow, sat stock still for ages, occasionally turning its head, but never really giving a great view of itself, until it finally took to the air and flew a short distance to the top of a hydro pole! Not surprisingly I lost sight of it during this transition, due to the glare of the sunshiny snow and it being white! At first I wasn’t sure where it had gone, but then, looking down the road past the fanatical photographer, who was laying prone on the ground taking pictures of Snow Buntings, I spotted it!

The bird sat up on the top of the pole, looking amazing in the sunshine, but was having quite a battle with the windy conditions. Its feathers were quite ruffled, by the biting wind, and I wondered, as I sat with my car engine and heater running and my window open, how long it would stay there. Well, my hands started to get really cold and my gloves were donned, as I tried to maintain a steady hold of my camera and trigger finger, whilst, still keeping my eye to the lens eye piece, awaiting its next flight!

After over an hour of waiting it took off, but so suddenly it was gone in the blink of an eye. Luckily, however, it landed in the snow not many metres from where I sat and I was able to get some very quick, fairly close-up, pictures of it. This was to be very short lived, as it took off, once more, and I just managed to get a couple of in-flight tail end shots, as it flew off, to disappear out of sight. What a great afternoon it turned out to be.

A beautiful, sunny Autumn day in the countryside

Why I shouldn’t make assumptions!