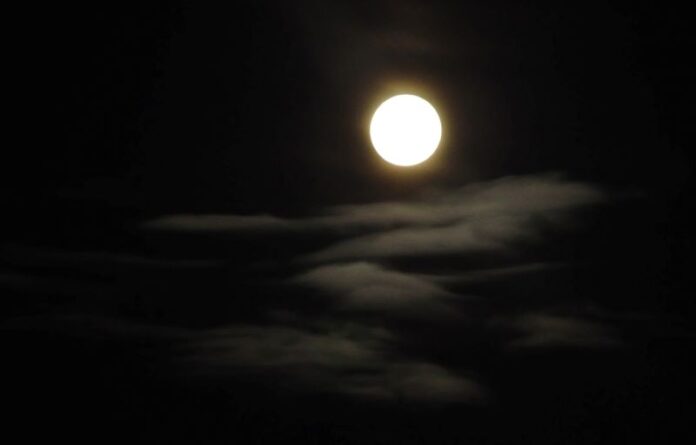 The Wolf Moon rose in the east shortly before 5 pm on January 28, which also happened to be a few minutes before sunset. The air was very cold, the sky was clear. This moon was the highest full moon of the year. The moon appeared to be full for three days, from Wednesday morning, to early Saturday morning. The full moon in January is called the Wolf Moon, because in the 1930s the New England Farmer’s Almanac started to publish what they called the “Indian Moon Names.” The original source of these names is unclear, and most likely not universal, but we can thank the Farmer’s Almanac for tagging each full moon with a name, based on the time of year. The Wolf Moon is also a European name of old, designating the second full moon of the winter, or the midwinter moon. This full moon was also called Candles Moon, from Candlemas on February 2.

Full moons are marked throughout the world. The full moon that occurred on January 28 is called Shakambhari Purmima in Hindu celebrations, marking the end of an eight day celebration. After this moon, a month of self-imposed austerity follows. The Tamil community of Hindus celebrates the festival of Thaipusam. In Myanmar, they celebrate the Ananda Pagoda Festival for a week, commemorating the Buddhist temple dating from 1105. In Sri Lanka, Buddhists celebrate Duruthu Poya, commemorating Siddhartha Gautama Buddha’s first visit to Sri Lanka. Most calendars are based on the moon, the months change on the new moon, and the full moon falls in the middle of the month. The full moon of January 28 falls on the middle of the twelth month of the Chinese calendar, Shevat in the Hebrew calendar, and Jumada al-Thani in the Islamic calendar. If you are interested in more about the full moons, or anything celestial at all, NASA’s website is the place to go! Check out solarsystem.nasa.gov Incidentally, I have challenged myself to learn more about how to take a good picture of the moon for the next 28 days. Let’s hope that the next full moon on February 27 (the night of February 26) is clear, and possibly a bit warmer!