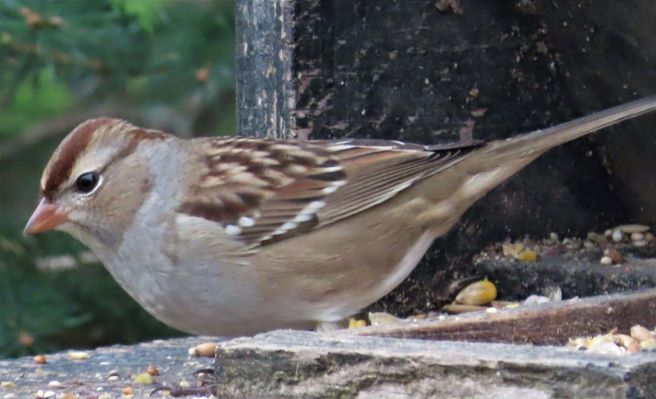 An interesting week for some rather unusual bird activity, both in the garden and away from home, but still fairly local. One of our NGTimes readers, living near the Rideau River, had the good fortune to see and photograph a Great Egret, a rarity in this neck of the woods. They also got a great view of  a Turkey Vulture when it landed on their property. I myself spotted a couple of them locally and a half dozen of them when having to drive between Winchester and Chesterville  passing within the proximity of the town dump!

Garden-wise, the usual crowd is here, but I did take a second look at what I had wrongly assumed was either a Chipping Sparrow or a Tree Sparrow, and I’m glad I did. On getting a reasonable picture of it and consulting my bird books, I realised that my first assumption was wrong and that it was in fact, a Field Sparrow that I was looking at. Its major distinguishing feature was its pinkish colored bill, which differs from the bills of the other two birds. Of course there are other very slight differences in the head and wing markings when in compared with the others, but the bill color seems to be the main one. The realization that I was taking things for granted when looking at the everyday birds was a bit of an eye-opener, so I’ll have to be more careful in the future.

With the weather getting a lot cooler than earlier in the season, I was also very surprised to witness a Robin taking a bath, but it did, and very deliberately so too. It wasn’t just a quick hop in and a quick rinse and out, but quite a prolonged session of in and out several times, with lots of fluffing of feathers and a lot of water flying around. It was very entertaining while it lasted, and I’m glad I didn’t miss it. Perhaps you have also seen some of these strange  but not abnormal things occurring, but if you haven’t, then make sure you keep an eye out to enjoy them too. Stay safe and well.