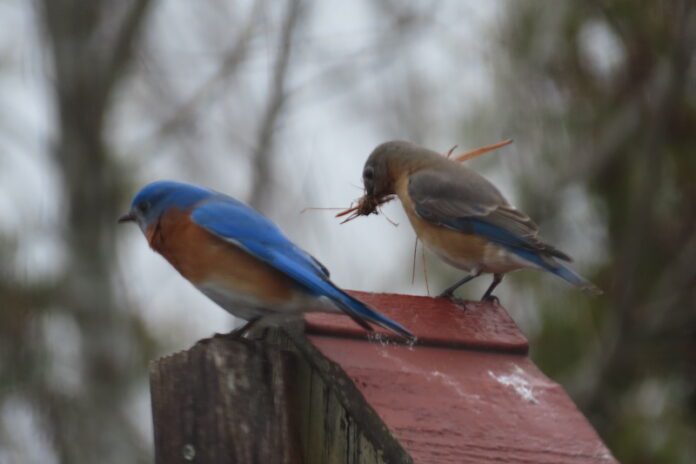 The warm sunny patches in our weather pattern seem to be working their Spring magic and the birds are starting to respond, as can be seen by today’s picture of a couple of Bluebirds. Whether or not this is an indication of a firm commitment to one of my nesting boxes still remains to be seen. Hopefully, it will be the case, but only time will tell!

Along with the more usual courting and nesting activities going on, we are still experiencing some somewhat fanatical and frenzied activity from our Robin guest mentioned in my last article. This bird has definitely got an obsession with wanting to get through windows of any sort! At first, it was just our basement windows that it tried to negotiate, and despite our trying to put it off, it was returning all day long, using its beak and body to try and gain access.

My wife and I thought that we had finally succeeded in deterring it, only to find that it had decided to try one of our car windows instead, where it  perched on a wing mirror, from which it launched itself downwards to attack the corner of a door window. We were attracted to what was going on by the ever increasing white streaks down the car body! Despite us cleaning it off, the Robin persisted and tried the other side mirror and window, plus that of another vehicle.

Obviously the vehicles being moved about at times proved a bit of a distraction from this strange behaviour, but now it has moved its plan of attack to the rear of the house and the large kitchen window. At seven o’clock this morning I was awoken by a persistent, but now very familiar, banging noise from the kitchen, down the hallway from the bedroom. Sure enough, friend Robin was the culprit, launching itself from our deck at the window to get in! A few frantic waves of arms and hands and it flew off again to regroup and think of its next strategy, which will be – what!

I’ll leave you all to ponder on that question and I’ll let you know the answer, if and when it is revealed by the Robin! Until then, enjoy the warmer weather and the birds that it brings, but above all stay safe and well.