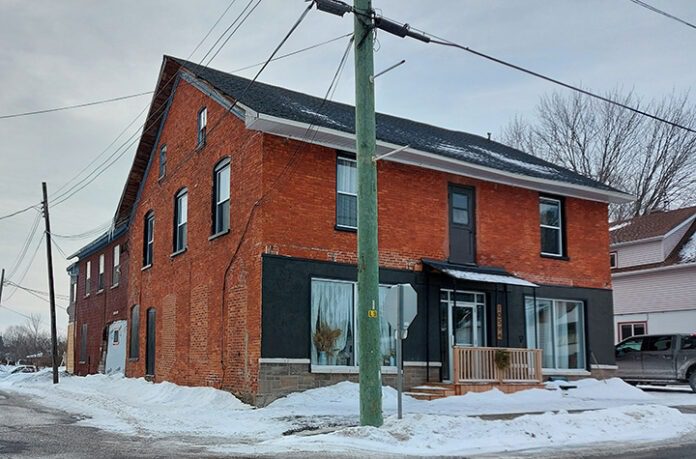 There have been many changes in South Mountain since Samuel Garnsey and John Faddel (or Farrel) first started selling lots in the new village in the 1840’s. For one thing, the Petite Nation River, as it was called in their day, is no longer the rushing flood it was when it powered saw, grist and planing mills in South Mountain. Like many of the rivers in the area, years of damming and silting have narrowed and slowed the stream.

One building in the village has seen many of those changes since it was built in the 1850’s. Standing at the corner of Main and Bridge Streets, this red brick building has been used as a store, a bank, a hotel and a post office. For some years, it was the home of the local newspaper, the Mountain Herald. Back in the 1950’s, local resident Dan Barry shared some of his memories of life in South Mountain when he was young with the Evening Citizen. He had once run a store in the building and could remember back to a much busier South Mountain.

“Kavanagh’s store was a very busy store. He had five clerks. The Christie store was farther up the street and there was John Ellis’ grocery. We had two butcher shops and a hardware – Bowen’s – but now they’re all gone… My grandfather, John Morrow, was the first postmaster. He ran a grocery and drove to Prescott to get supplies he had bought in Montreal.

“The mail came from Iroquois by horses every day, over planked roads that ran from Baldwin’s bridge to Iroquois. At night you could hear the empty grain wagons rattling as they rumbled over the plank roads on their way home. There were a couple of grist mills and a furniture factory here at one time and we had a factory that built ironing boards that were shipped all over by the car load”.

“South Mountain” to be inducted to music Hall of Fame