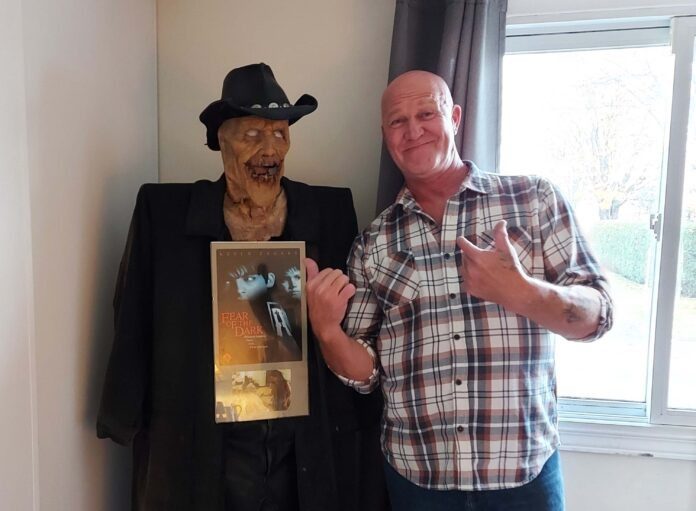 Many Winchester residents may not be aware that there is a movie and television star in their midst.

Actor and stuntman, Derrick Damon Reeve, comes across as a typical family man, a single father raising his four boys. When the Times visited his Winchester home, however, a hidden world of movie memorabilia came to life in the presence of the man who played an important part in each production.

Derrick, who is a distant relative of actor Christopher Reeve, has had a career as an actor and stuntman spanning decades, including work on feature films such as “The 13th Warrior”, “Battlefield Earth”, and “Jack Brooks Monster Slayer”. His resume also boasts many television shows and TV movies, including the 2001 TV movie, “Snow in August”, which was nominated for three Emmy awards.

During a tour of his house, Derrick showed me a McDonald’s toy figure of his character for the television show “Galidor: Defenders of the Outer Dimension,” as well as countless movie props and promotional items from productions on which he had worked.

Now retired from a career as a stone mason, Derrick has shifted to working exclusively as an actor and stuntman, and he has filmed many productions, even since the onset of the COVID-19 pandemic.

He auditions for roles regularly, and is often head-hunted for roles because of his experience in the industry.

Derrick is now seeking to provide a new service – he wants to teach others about acting, and about how to get a foot in the door in the film and television industry. He wants locals to be able to learn from someone experienced, without having to travel to the city, and what better person to provide that service than him?

“I always get asked lots of questions when on set, because I’m often one of the most experienced guys there,” he told the Times. Knowledge he would be able to pass on is wide in range. He knows who to contact for auditions, how to prepare a resume, what casting directors are looking for, and what to expect on set.

His goal would be to guide local talent through from the beginning, starting when they are completely new to the industry, all the way up to when they are established actors on set. He told the Times that the process is often much faster than people assume, and it is possible to be on set within days of pursuing a role.

Derrick’s youngest son, Hunter Damon Reeve, has recently expressed an interest in acting, and the two did a Hallmark movie together a few months ago. Derrick is ready to work with interested actors “age 0 to 199”, telling the Times that a person is never too old or too young to get started in the profession.

Any local people who are interested in speaking with him can contact him directly by email at derrickdamonreeve1961@gmail.com. A video highlighting some of his work can be found at https://www.youtube.com/watch?v=exws1E-gXlw.

A long tradition of newspapers

Christmas parades will kick off the season locally