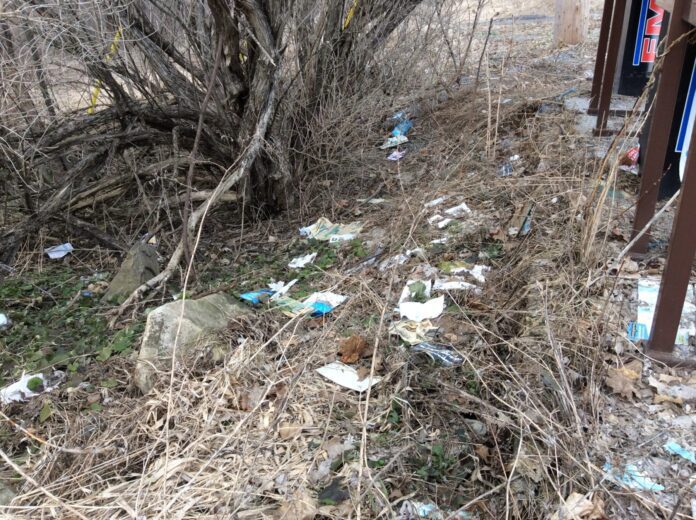 One of the most awful and ironic things to see so close to Earth Day is the garbage lining our streets, roads, and highways. Littering along roadways is nothing new, but that doesn’t make it any less reprehensible. One concerned area resident reached out to the Times to express her frustrations that littering continues to be such a major problem. She asked to remain anonymous because she is only one of many people with the same opinion, and does not want to steal the spotlight.

The woman, who lives inLittering a major issue along roadways Hallville near the border between the Leeds & Grenville and SD&G counties, has recently been in contact with SD&G Counties officials, trying to persuade them to post anti-littering signs along roadways which could also warn about potential fines if caught. “It’s ludicrous to not have something there,” she said. “At least it reminds people.” Of course, cracking down on littering can be next to impossible. Litterers either have to be caught in the act – which is unlikely on sparsely populated roads, or at night, or when the offender is discreet – or their discarded trash has to include something that identifies them, such as an addressed letter. Since most discarded trash along roadways consists of fast food containers and other “travel” garbage, identifying offenders after the fact is just as unlikely as catching them in the act. The woman who spoke with the Times had a unique perspective, however, saying that it should be more about training the new generation to simply care more about the planet and not litter, rather than punishing offenders.

A new issue created during pandemic life has been the littering of used disposable face masks. Billions of masks have been produced during the pandemic, and one study estimates that 1.6 billion of these masks ended up in the world’s oceans in the year 2020 alone. This is significant, and while days like Earth Day are designed to make people think about issues of littering and pollution, thought does not always translate into action. School children often do activities on Earth Day such as filling garbage bags with litter from their schoolyard or local streets, but one day per year may not be enough.

One beneficial program that exists throughout North America is the so-called “Adopt a Road” program, which allows individuals and organizations to “adopt” specific stretches of roadways which they agree to clean twice per year. The county or municipality provides garbage bags, gloves, and other needed supplies, and the road’s “adopter” simply leaves the filled bags of litter on the side of the road for collection. Those who participate are recognized with roadside signage that identifies their contribution to keeping the roadway clean. While the SD&G United Counties has an advertised Adopt a Road program, no mention of a similar program for the United Counties of Leeds & Grenville could be found online. It is unclear if Leeds & Grenville has such a program.

Much change still needs to happen in terms of many people’s views on littering, and changed mindsets may very well be the key.