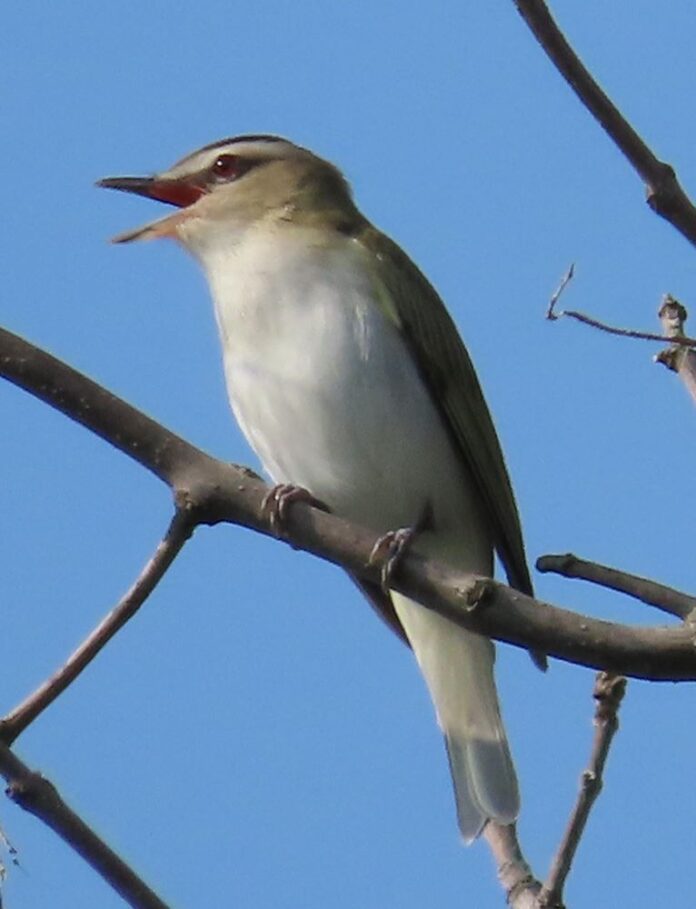 The other morning, still clad in my PJ’s, and sitting out on a very sunny warm deck, I was able to get some pictures of Bluebirds checking out my nesting boxes, and a new comer, singing its heart out at the top of a neighbor’s tree, a Warbling Vireo. What a lovely bird, but quite hard to see without a zoom lens, or binoculars. It was the song that first drew my attention to it, or them, as it appeared that there were at least two or three initially.

At first I thought it was the House Wren, who sings away at the top of the garden trying to attract a mate to one of my nesting boxes, but there was a different tone to the song this time and it had a different body shape and a whitish blip of coloring to it, as it flew. Once sighted on its tree top perch, my camera lens did the rest for me, and a look into my bird guide books allowed me to identify who this new visitor was. A new one for me, and a very satisfying spot, as was the one of an overflying Heron this morning too.

The Cardinals and Robins are singing away, as the days start to warm up and the familiar whirring of the Hummingbirds wings can be heard as they compete with each other for their right to get a drink from the feeder. Of course, now that the flowers are starting to bloom, they have more choice as to where and when they can feed without interruption! They do seem to like a last evening drink at the feeder before calling it quits and retiring for the night, which is probably something you like to do too!