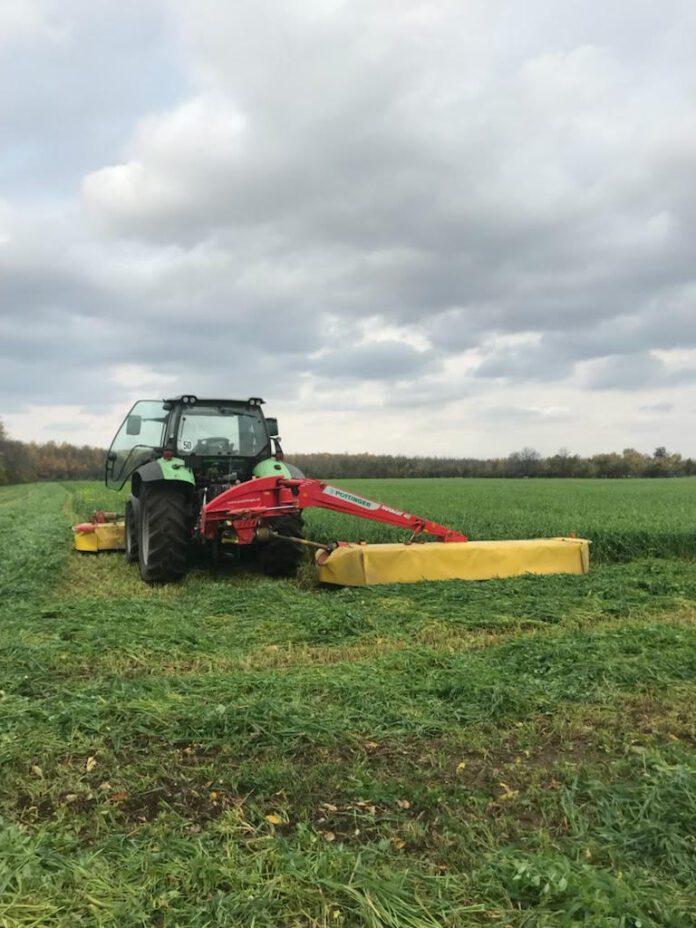 Haying season is upon us and farmers across the region are busy cutting, raking, baling and storing – all in preparation to sustain the winter.

But it takes more than the act of cutting hay at the appropriate time to ensure a top quality feed for the animals. From soil nutrition and efficient equipment to timing and storage, farmers put endless time and energy into creating a well balanced system that benefits all.

At New Care Farms in Iroquois, Ontario Josh Biemond puts his hay season at the top of the priority list. His Organic dairy herd is grass fed as long as possible year round and with this in mind, Josh has learned to develop a system where he can create the optimum growing conditions for hay that will contain all the nutrients the cows require even in the peak of winter.

The key to quality feed is making sure the ratios between available calcium and phosphorous are at 3:1. Taking soil samples, tissue samples, final feed samples is one method of checking if the process is sustaining through the life cycle of the plant before and after cutting.

New Care Farms’ target is to have brix (sugar) levels between 10-15% in the hay which indicates that the minerals and other nutrients are present and will sustain the cut hay far longer while wrapped and will provide enough fibre, protein and energy to significantly limit the need for added minerals and supplements in the diet.

The cows are exclusively on pasture from mid-April though September/October each year and from October-December they receive a fresh cut/green chopped barley/peas/oat grass until the snow prevents further cutting. Jan-Mid April, the cows are fed the wrapped hay and receive a limited amount of barley/peas/oats grain mix during milking to boost the energy levels.

Another key element in developing optimal forage is the equipment being used. This year, Josh took the plunge and finished upgrading his entire line of hay equipment.

He started last year with a combination of a front and rear mount mower allowing a total 24’ swath in one pass reducing the amount of compaction and damage from the tractor. He has since added a McHale baler and a front mount rake allowing him to complete hay in 2 total passes. Imagine, hay in a day! It can be done.

The new equipment is all designed with the preservation of the grasses in mind. The settings allow the operator to control the chop, pressure, size and tension of each bale all from a screen in the cab. Less time wasted getting in and out and more time for more hay.

Finally, timing and biology is everything. Farmers wait and watch the weather multiple times a day looking for the perfect conditions to cut, dry and bale. At New Care Farms, Josh knows that the best time to cut is at 4:00 in the afternoon because this is the peak moment when all the nutrients are up in the grass before being sent back down to the roots at sunset.

If the weather allows it, he is able to cut, let it dry over night and be raked, baled and wrapped by end of day the next day. And he will have captured the hay at its peak nutrient quality.