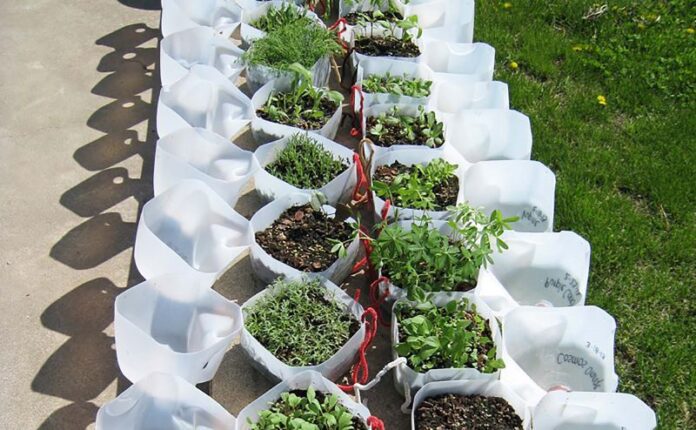 Winter sowing is the practice of making little green houses in order to germinate your seeds, and grow your seedlings. Many types of flowers and food are good candidates for winter sowing, and there are Facebook groups and websites dedicated to both. The idea is to plant seeds in jugs or bottles, throughout the winter months, and putting the jugs outside in the snow where they will get a jump on the growing season. They will be protected from birds and animals, and will begin growing when the temperatures and daylight allow it. The jugs create a greenhouse for the seeds, providing optimum warmth and moisture.

This method first took off with people growing perennials in colder zones, like ours. Many perennials that are native or acclimatised to our zone, and other colder areas, require seed stratification before they will germinate. Seed stratification is a process of recreating the conditions that seeds would experience in their native habitat if they were germinating on their own. Native plants have evolved over thousands of generations of growing to make sure the seeds are protected enough to rot through the winter, but still allow them to germinate in the spring. Many seeds have built-in ways of protecting themselves for long enough to make it through to the next growing season, as many perennial flowers in their natural habitat would experience a range of conditions while waiting for the optimum germinating and growing conditions.

It stands to reason, then, that you cannot just take the seed of a native plant that has developed a remarkable ability to protect itself through a harsh winter of wet and cold, drop it in some seed mix, and expect it to grow. Many seeds of native plants respond well to planting outside in the fall; many of those seeds, though, will end up as a snack for some hungry mouse or bird, which is why Winter Sowing is a good option. Some people stratify their seeds by putting them in damp paper towels, then the freezer, for a specific time, but if you can plant them out in mini green houses, why not?

The idea quickly spread to gardeners growing annual flowers and a variety of food plants. Any tall, deep clear, or almost-clear, container will do. There has to be enough room for a good root system, and some height to develop. Milk jugs are really the best, except for the obvious problem that very few of us buy milk in jugs! When people used to travel to the States to get groceries, most cross-border shoppers were happy to share their used milk jugs with a gardener, even if the request seemed a bit odd! The four litre water jugs will work as well. They’re not as sturdy as milk jugs, but there’s plenty of them out there!

Cut the jug around, about half way up, leaving a few inches uncut for a decent hinge. Drill or poke some drainage holes, about 4 or 6 on the bottom, and a couple about an inch from the bottom to prevent the jug from flooding if the bottom holes get blocked. Put a few inches of very damp soil in the jug. Your plant will be in its jug for a couple of months, so make sure there’s plenty of soil. Use a potting soil mix, not a soilless seed starting medium. Plant the seeds in the soil in the jug. Tape the top on well around the cut of the jug. Don’t skimp on tape, because your seedling is in for a terrible shock if your tape gives way! Duct tape works well, as does that red tape meant for vapour barrier.

Discard the screw top lid, you do not need it. Mark what is in your jug, using a paint pen: markers wear off. I also put a plant tag inside the jug, just in case. Put your jugs outside where they will stay under the rain, snow, sun, and wind. Do not put them in a protected place beside the house, where they will get too warm. The idea is to create a gentle greenhouse to give them an early start, and help them grow hardy. You will end up with a plant that is ready to plant earlier than it would be with direct sowing, and hardier than it would be if grown inside.

We start plants like peppers and tomatoes very early here in Zone 5, usually 8 to 12 weeks before last frost. Growing these crops from seed in winter sowing jugs doesn’t give the plant enough of a headstart in comparison to indoor planting. There are also things that really hate to be transplanted, such as cucumbers, pumpkins, and the other cucurbits. Cucumbers do best directly sown after the last frost, so it’s not worth trying to winter sow them, but, it might be worth trying to winter sow some of those that need a longer season, like some of the melons. Winter sowing will get your greens and brassicas into the ground a couple of weeks earlier than you would with direct sowing, and many flowers are great candidates for winter sowing.

Climate change poses some challenges for winter sowing. A winter with many freeze-thaw cycles can start plants too early, then freeze them dead. But give it a try if your space to start seeds inside is limited, or if you want a couple of weeks head start on some things. Winter sowing seeds that need stratification is easier than messing around with seeds in your freezer.

For some detailed step-by-step instructions and pictures, check out some of the groups online:  wintersown.org. Facebook groups: Winter sowing vegetables with Sheryl Mann, or Winter Sowers group by Wintersown Educational and Trudi Davidoff.