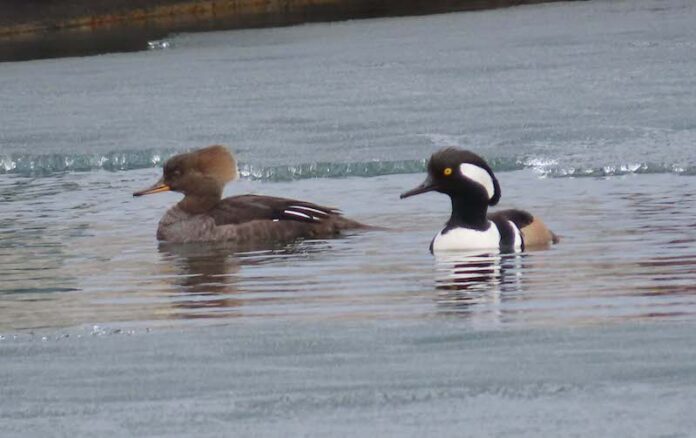 This week has seen a few different Spring arrivals, despite the changeable and quite cold weather! Previously, I had a fleeting glimpse of a Bluebird but we have also had some Cedar Waxwings in the garden over the past week and a flock of Redwing Blackbirds. However, the birds that I have seen are not just confined to the domestic garden variety in our neighbourhood, but some are of the Water Fowl type. One morning I stopped at the end of our road to watch some of the migratory Canada Geese come in to the creek for a brief respite on their way to the North. On another morning, whilst venturing out for breakfast at a restaurant by the St Lawrence, I made sure that I had my camera with me and wasn’t wrong in my decision. Whilst eating, I spotted movement out beyond the shore ice, which turned out to be two varieties of Mergansers, Common and Hooded. Most of my pictures were taken at a distance, but once we had finished breakfast, I ventured out along a jetty to get some better views of them. A pair of Hooded Mergansers very obligingly landed on the water by an adjacent jetty which allowed me to get some really good views and pictures of them both before they flew off. Prior to seeing them. I got a view of one of the Common Mergansers just after she dived and surfaced with a fish in her beak. What a treat, both for her and me!

Hopefully this cold weather will disappear very soon and we can start to enjoy some sort of Spring and Summer.