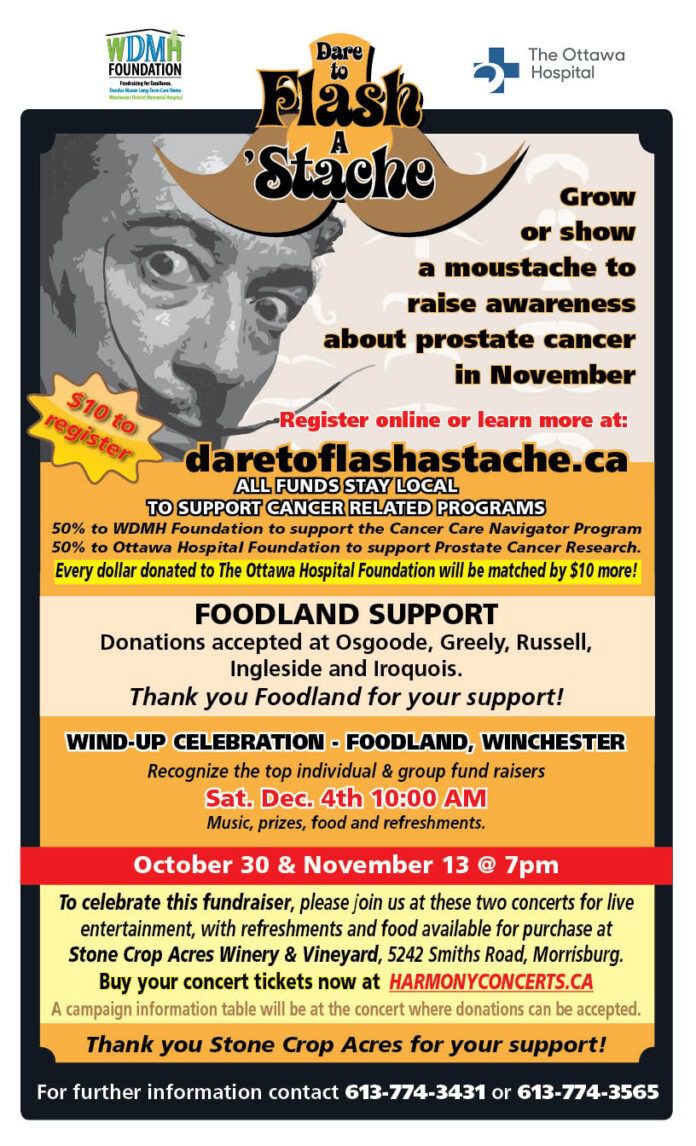 An annual campaign to bring awareness of men’s prostate cancer is in full swing this month and next month.

The Dare to Flash a Stache campaign is hosted by Winchester area agency Black Walnut Group,and is supported by Prostate Cancer Network Ottawa.

This year’s campaign will raise money for two different programs. One is the Cancer Care Coach program of the Winchester District Memorial Hospital Foundation, and the other is the prostate cancer research program at the Ottawa Hospital. Money raised will be split evenly between the two programs, with Ottawa’s portion of the donations being matched 10-fold by the Ottawa Hospital Foundation.

A poster distributed by Black Walnut Group strongly encourages both men and women to get involved in spreading awareness and raising funds, reading in part, “We dare you men to grow beards, or shave them off, and to solicit friends and others to support you.

Ladies, don’t feel left out, decorate a stick-on moustache and wear it with pride.”

The Times met with Tom Clapp from Black Walnut Group, who shared his story. Tom is a prostate cancersurvivor, and he largely credits local doctor, John Burke, for catching his cancer early and saving his life.

This is because Dr. Burke regularly checked Tom’s prostate-specific antigen (PSA) levels, which is a test that is as effective in identifying prostate cancer in men, as a mammogram is for testing breast cancer in women. However, Tom told the Times that many doctors do not actively encourage their patients to get PSA tests, which cost $35 each, unless the doctor decides to waive the fee.

Donations are being accepted at various Foodland locations throughout the region, including the locations in Winchester, Osgoode, Greely, Russell, Ingleside, and Iroquois.

There will be two fundraising concerts at Stone Crop Acres Winery & Vineyard on October 30 and November 13 at 7pm, featuring live
entertainment, refreshments, and food available for purchase.

To end the campaign, there will be a Wind-Up Celebration at the Winchester Foodland location on December 4 at 10am, which will feature music, prizes, food, and refreshments and will see the recognition of the top individual and group
fundraisers.

Tom told the Times that Dare to Flash a Stache was born after he became interested in doing a “Movember” campaign, but he found out he would have no say in how funds were allocated. “So we said, to heck with you, we’ll start our own!” Tom joked.

Last year, the campaign raised about $12,000. As a cancer survivor, Tom is hopeful that, one day, men will feel just as comfortable as women when it comes to talking about their health, and cancer in particular.

Moustache Mania – the results are in

‘Flash A Stache’ is a luxuriant growth

Firefighters ‘Dare To Flash A ‘Stache’ in support of hospital