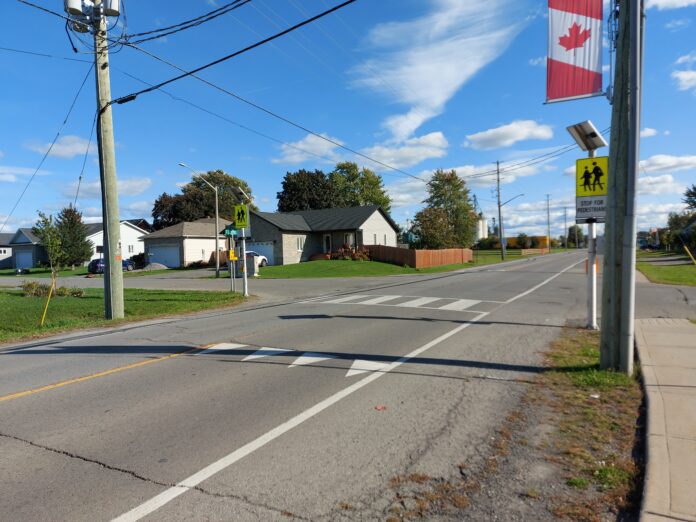 A Winchester resident is speaking out regarding what she believes are dangerous conditions at two of Winchester’s pedestrian crosswalks, saying that it is only a matter of time before someone gets hurt.

Winchester local, Amanda Ross, reached out to the Times with a concern that her son had almost been hit by a car at the pedestrian crossing which sits at the intersection of St. Lawrence St. and Wintonia Dr. “Cars just don’t stop for the kids,” Amanda told the Times. “Lots of witnesses to how bad this is getting.”

The crossing at St. Lawrence and Wintonia is protected by bright flashing lights, which were installed in 2019. The crossing features standard pavement markings, as well as posts with reflective signs for both directions of traffic that warn motorists to yield to pedestrians.

The LED lights – which pulse rapidly – are activated by a button pushed by pedestrians who wish to cross. The intention is, presumably, to prevent drivers from becoming habituated to seeing the flashing lights by only having them operational when danger is present, similar to a railroad crossing.

Despite the advanced technology at St. Lawrence and Wintonia, many drivers simply don’t yield the right of way to pedestrians, which has left some residents fearing for theirs and their children’s safety. Amanda believes the new system may actually worsen safety.

“The yellow lights are causing the cars to just slow down, and not stop at all,” she told the Times. “Parents have waved down cars to stop, and the cars have even gotten mad at the crossers. We have now stopped pressing the button to cross and have told our children to just stand and wait until there is not a car in sight before crossing the road.”

On July 13, North Dundas Council announced plans to upgrade two pedestrian crossings – one in Winchester at Main St and Christie Ln., and one in Chesterville at Main St. and Church St. – to the same level 2, type C crosswalk as that found at St. Lawrence and Wintonia. With the Christie Lane crossing already completed, the issues at St. Lawrence and Wintonia bring into question whether safety issues that have existed at the Christie Lane crossing for years will persist, despite the Township’s efforts to improve safety.

Past social media posts bring to light the severity of the crosswalk problem in Winchester. A post in September of 2020 by a Winchester resident sharing an update from the Township, garnered dozens of strong comments from fellow locals. Referring to the Christie Lane crosswalk, one commentator wrote, “Let’s hope that no one is injured here, while we wait for a better solution for this crosswalk.” Another pointed out that a crossing guard posted at the crossing to assist children walking to school was almost struck by a vehicle that very morning.

Winchester has a third active pedestrian crosswalk on St Lawrence St., between Clarence St. and York St., which uses a signaling system that resembles a standard red-yellow-green traffic light. The traffic light remains green, but when a pedestrian pushes the button, the traffic light changes first to yellow, then to red, and remains red for a set period of time to allow the pedestrian to cross. There were no complaints to be found about this particular crossing on social media.

Failing to yield the right of way at pedestrian crosswalks in Ontario is a violation of the Highway Traffic Act, and carries a fine of up to $1,000 and four demerit points.

Penalties for drivers who endanger pedestrians can be even more severe if their actions result in a charge of careless driving, or careless driving causing bodily harm or death. These offences can each result in six demerit points, and fines of $2,000 and $50,000, respectively, with the possibility of jail time and a driver’s licence suspension in severe cases.

Those wishing to report issues, or suspected violations at pedestrian crosswalks, can do so by calling 911 (for emergencies only), or the Winchester detachment of the OPP at 613-774-2603.

Local Hollywood actor wants to pass on his talent