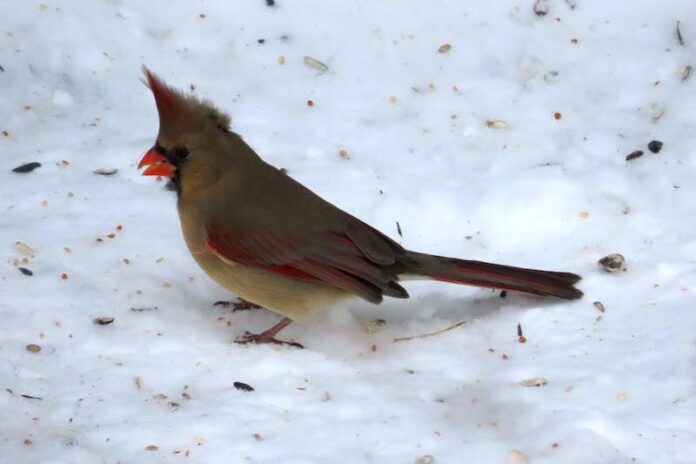 Signs of warmth are slowly returning, as Spring emerges from the murk and cold and a number of our resident summer birds arrived back, in the flurries of snow! Some of them, a flock of Red-winged Blackbirds, had been spotted by my hairdresser, also a Times reader, who enthusiastically told me about them. She lives near the Limerick Forest and described seeing a flock of them, and she was very emphatic that they were Red-winged Blackbirds, being a bit of a bird enthusiast herself. How could I argue when she hadn’t got around to using the open bladed razor to clean up my sideburns, yet!

However, any of my “Doubting Thomas” thoughts were quickly dismissed, in shame I might add, because, on arriving back to my home, what did I see on my bird-feeder and in a nearby tree, but two of them. I suspect they had very puzzled looks on their faces, because I was seeing them through quite a strong flurry of snow, and they must have been wondering why they had bothered coming back! Oddly enough, I think they know best about the weather, because within a couple of days of that incident the sunshine is out and the temperatures are on the rise. Next week, everyone will be complaining that it is too hot!! Ooh did I say that, eh!?

Not only have the Red-winged Blackbirds returned, but the Robins have too, and are trying out their Spring voices, along with those of the Canada Geese who were standing on the snow banks by the river at the end of the road. I expect that in the next few days we shall be seeing skeins of them flying in, or just passing overhead, on their way North. A wonderful sight for us all to witness and behold, and I hope that you all get to see and feel the elation too, of all the birds looking forward to building their nests and bringing into the world the Spring broods of their next generation.

Stay safe and well and enjoy them all out in your own garden, and not just through a window!