Phoebe or not Phoebe? That is the question! 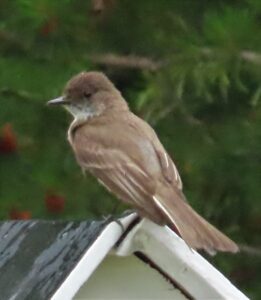 With the strange up and down weather we are experiencing at the moment, it is difficult to decide what to wear just stepping out into the garden! The birds seem to be coping with it, as they do, and are still in evidence wherever you care to look. Those who were nesting in my bird boxes are still around, even though their young have “flown” and are still busy searching for food for themselves, if no one else.

I witnessed, through our kitchen window, one of our Bluebirds, which seemed to appear out of no-where to “shoo off” a squirrel, on our deck fence! I am at a loss as to why that might have been, as they weren’t anywhere near the former’s nest, from which the young had already departed! On another day, working outside, a loud racket in the sky above my head drew my attention from what I was doing. There was a Hawk being harangued by an irate Crow as it tried to fly by. They were both quite high up as the bigger bird tried to evade the continuous attacks on it, which were accompanied by hysterical “cawings”! I, foolishly, didn’t fetch my camera to capture the occurrence, being so caught up in watching to see what was going to happen! Well, nothing seemed to be resolved and the pair of them disappeared from view,–still squabbling!

This morning I did have my camera to hand when I spotted a different bird shape flitting about near my nesting boxes, where our Wrens are still busy catching food. I thought, at first, that it was one of them that I was seeing, but the size difference drew my interest. My trusty zoom lens soon confirmed my suspicion and a picture of the bird and my bird book confirmed that it was, in fact, an Eastern Phoebe. It is a “Flycatcher’, so hopefully it will be having a go at ridding us of some of those blasted mosquitoes, who seem to be relishing the damp warm weather! Hopefully it will soon settle down for us to enjoy the “outdoors”  and some sort of a summer. Make sure that you don’t miss it and stay safe and well. Enjoy!