The last few days before Christmas proved quite interesting, as the birds, who actually have to travel south to get here, arrived. I am not referring to the transitory Canada Geese, who just use us a stopover point on their big journey farther afield, but our Snowy Owls and Snow Buntings. The latter are not so numerous yet, but the owls are doing us proud in numbers, as many as eight being spotted in one day in the area where they come to every year. Within the last few days, on two different occasions, I have seen two individual owls at different spots. Most of them are female, so the chances of seeing a male are a little bit scarcer. Yesterday, I got to see one of each on their lofty perches. The female was on the other side of a big field and only just visible to the naked eye in the cold afternoon sunshine. She stayed fairly still for quite some time, and just seemed to be listening, although at one stage she appeared to regurgitate, as they do, a very large pellet of waste from her mouth! These usually contain all the non digestible parts of their victim’s bodies, such as bones and fur. Unfortunately, although I witnessed this action through my camera lens, I didn’t get a shot of it happening! Neither did I get a picture of her when she took off. I was momentarily distracted by a noise behind me and when I looked back she had gone! 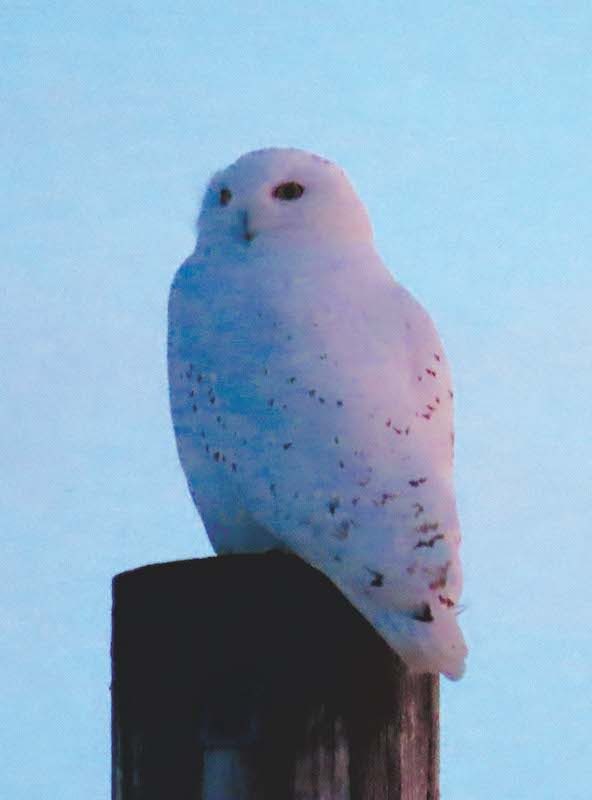 I circled around the area for a while and happened to come across a hedgerow tree harbouring a flock of thirty to forty Snow Buntings. They stayed long enough for me to see what they were, and then they were off again, and so was I, doing another circuit, as the afternoon sun developed into a beautiful sunset. The cloud formations were quite stunning, and I stopped now and then to capture them and the lovely colors in my camera’s memory.

As the sun got lower, I came to the very last corner I would navigate before heading for home, and, looking across the road towards a building set back off a side-road, I spotted a lovely white blob on the top of a high hydro-pole. Could it be another owl, and a male one at that? Yes, it was, confirmed by my camera’s telephoto lens – wow, what luck! So, with the light fading, I crossed the road on to the small side-road and clicked away until the light went completely, hoping that he, too, would take off for me to get an in-flight picture, but that wasn’t to be! It was dark and I was getting very cold when I called it “quits” and headed for home, leaving the owl in peace, as he readied himself for another night of hunting. What a treat to see him at all, having already seen a female earlier.

The garden birds have been ignored, just a little, during my “winter bird” deviations, from watching their activity and that of a very industrious Red Squirrel. This little fellow was, and still is, almost in a panic as it grabs food from a feeder and rushes to a “Stash Hole” in the ground, where it hurriedly deposits it, barely stopping for breath as it rushes back and forth to the feeder again and again! What a performance!

At one stage, he was climbing into one feeder, jumping across to another, and then, from there, back to the hole in the ground. A continuous circuit, time and time again! What energy! I hope that it can remember later in the winter where this “stash” is, and that it gets to it before the marauding Blue Jays do! He is in such a rush that he scatters the ground, feeding a flock of eighteen Mourning Doves and the Juncos in his rush to get to and fro! He causes a little consternation to our six Blue Jays too, but why should they worry, if they later get to sample food from his larder?

Whoops! Nearly forgot to tell you the answer to my puzzle about the number of Mourning Doves hidden in the rocks, in my last article. The answer is five, and I hope you enjoyed looking for them. Hopefully you will also look in your own gardens and backyards and see some for yourselves.

Above anything else, please stay safe and well,