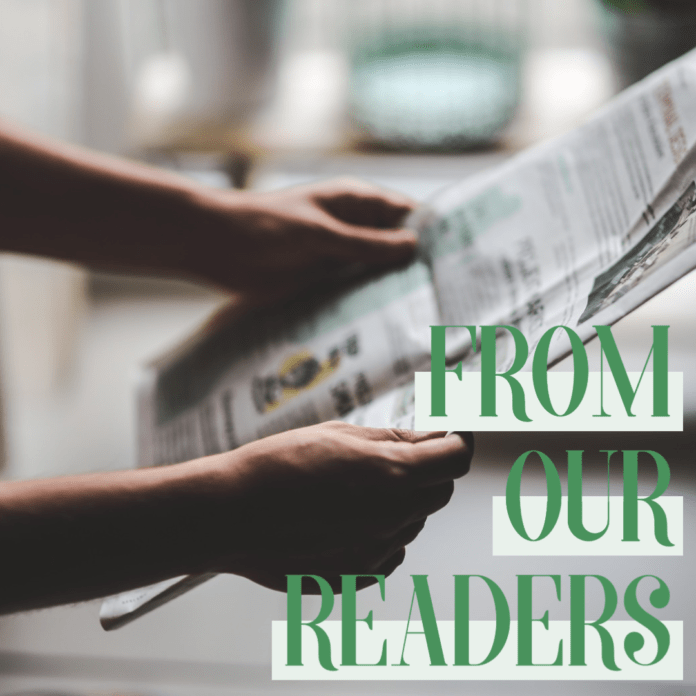 I would like to acknowledge my appreciation of The Times for their open and
objective platform which provides an opportunity for robust debate on controversial issues such as man made climate change.

It’s
truly a positive experience that Fred Schueler, Colin Creasey and Mannie Giles
took the time to contribute so extensively to the conversation, and that The Times gave us the opportunity to put our views forward.

A good place to start is what we do agree on.

Firstly, climate is changing and, secondly, we need to take better care of the earth. The question is how much is caused by us.

To my knowledge, there is no conclusive evidence or measurement that human activity is causing a dangerous rise in temperature. We can do a much better job cleaning up the earth.

That being said, it cannot be proven that a clean earth will stop the climatic swings.
Al Gore did much to vilify CO2 when, in actuality, it is correlated to, but not causing, the climate to warm. The warming takes place first, and then warmer air can hold more CO2. And it is not toxic.

For example, when you are in a crowded room, CO2 levels can go as high as 3000ppm and no one gets sick. It is estimated that the Mount St Helen’s volcanic eruption in 1980 spewed more CO2 and greenhouse gasses than man has in his entire history, and we didn’t
die, nor did the temperatures rise. But CO2 now has a bad reputation, and that reputation
precedes any discussion that takes place.

So lets have a look at some facts about CO2.
CO2 levels were lower in the 30’s, which was the hottest decade on record. A record breaking heat wave in California in 1923, with temperatures over 100 degrees, lasted over thirty days, with the hottest day being 134 degrees.

Scientist William Happer believes, “We are really in a CO2 famine now…..

Most of the time CO2 levels have been 1000 ppm.” (an idea supported by ‘The Royal
Netherlands Institute for Sea Research’) “There isn’t the slightest evidence that more
CO2 has caused extreme weather. For example, earlier temperatures were similar to today’s when CO2 levels 5X’s
higher…”

And these levels obviously had nothing to do with the burning of fossil fuels which are named the culprit of rising CO2 levels today. Takeda Kunihiko, Vice Chancellor of the Institute of Science and Technology at Chubu University in Japan states, “CO2 emissions make absolutely no difference one way or the other…… Every
scientist knows this, but it doesn’t pay to say so.”

New Zealand climate scientist Chris de Freitas believes, “The influence of increasing
CO2 on global weather is almost indiscernible.” This must be the case, since CO2
levels during an ice age were 10X’s higher than today.

These natural variations occurred, and science cannot differentiate between what
man is causing and what is natural. Apparently, CO2 levels could double and we wouldn’t notice any difference in the weather.

So if its not CO2, what is it that causes these swings between warming and cooling?

There are hundreds of influencers, some of whichare solar activity, water, water vapour, methane, clouds, ocean cycles, plate tectonics,
atmospheric dust, cosmic rays, and forests. Water vapour is by far the greatest factor, influencing 90% of warming and having a far higher concentration in the atmosphere than CO2.

We have been inundated with misinformation in orderto support the ‘climate emergency’.

For example we have been led to believe polar bears are ‘starving to death’ because
of climate change, when, in actual fact, their numbers have quadrupled since the
1960’s. Susan Crockford did a study on this and writes about it in her book “The Polar
Bear Catastrophe That Never Happened”.

Another alarming headline: “Arctic Ocean Getting Warm: Seals Vanish and Icebergs Melt”, was the cry in the Washington Post in November of 1922. Arctic sea ice was 22% greater in 2016 than in 2012. The decline in Arctic ice ceased in 2007, it plateaued and now is
growing, apparently part of a 60 year cycle, according to Ron Clutz of ‘Science Matters’.

We have been told that forest fires have increased due to recent climate change.
Forest fires have nothing to do with CO2, but rather with warmer fluctuations in
the weather.

The floods of 1913 in the US, coupled with raging tornados and fires, caused loss of life and devastated territories, leading to famine and disease. One of the worst floods in 1925 killed 1,000 people. In 1936, the whole eastern US was flooded. Millions of floods have occurred in our history. They are not new.

Alarmists stories go like this: In 1988, the UN claimed the Maldives would
be underwater in thirty years, and James Hanson of NASA claimed Lower Manhattan
would be underwater by that time as well. It’s three years past that date and the Mal-
dives and Lower Manhattan seem to be still there and not under water.

In summary, tornadoes, hurricanes, fires, and floods are part of the weather system, and they are not increasing as the climate alarmists would like you to believe.

There is only one truth out there, and I do believe we are all sincerely trying to find out
what it is.

Maybe searching for it outside of government documents would be a start.

Our Wetlands and Biodiversity

WHAT’S NEXT IN CLIMATE CHANGE? THE FACTS!