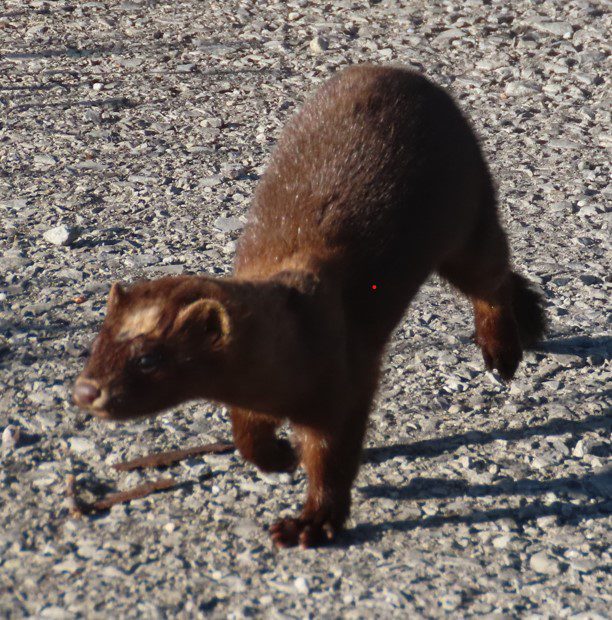 Here’s hoping that you all had a very happy and enjoyable Thanksgiving weekend and that you were all able to take advantage of the very warm sunshine that blessed us once again. On an equally sunny Tuesday, after my weekly breakfast with friends, I asked my wife if she would like a drive out to see all the Autumn (Fall) leaves at their very best. Receiving a positive reply, we “hit the road” south and then west with a view to ending up in the village of Westport. What a beautiful drive that was too, with plenty of opportunities to stop and take pictures of the brilliant red, yellow and orange leaves. Arriving in Westport just after noon, we went to our favourite restaurant there, to partake of some refreshment, at which stage my bird watching activities for the day commenced.

Initially I just left my wife at the table to take a few scenic shots, but then my eyes got drawn to the water and the half dozen or so Canada Geese who were waggling their white posteriors in the air, as they dove for the tastier tid-bits on the bottom of the lagoon. They were near to an area of reeds out of which appeared our first Great Blue Heron of the day, to join them! It was quite the pleasant surprise and it occupied my time, while we waited for our meal.

Sufficiently sated by our meal, we decided to head up past the Foley Mountain and then onwards to take The Narrows Lock Road on the start to the “back-home” route. Once off the main road this road is very twisty, but the colours were magnificent and a few stops were made to capture them for later.

On arriving at The Narrows, we were still in “bright leaf colours” mode until we spotted a long slim form running alongside the shore. Well what could it be!? Our first thought was “Otter”, but a passing motorcyclist gave us his very firm opinion that it was a Mink!  Having looked at some of the expert advice on Google, I am inclined to agree with him, but could be wrong! It wasn’t the only one, as we got to see two of them at once, and there seemed to be some competition over quite a large fish that they, or one of them, was trying to drag through the undergrowth to its den. They didn’t seem to be overly concerned with our presence and didn’t seem too perturbed at the cars passing close by. I was able to get some close up pictures of one of them, so was quite pleased with myself, as was my wife who also got some.

Having wearied ourselves of trying to get better views of it, we decided to journey on and almost immediately spotted another Great Blue Heron in the water with a beautiful background of Fall colors. Then a few more meters down the road, a Turkey Vulture did a circuit above us and then was gone. Since time was getting late we ‘called it a day’ and headed back home, after a very satisfying and beautiful Fall day’s  participation in what Nature had to offer us, and that was plenty! Hopefully you are able to get your share of it too, but remember to stay safe and well.