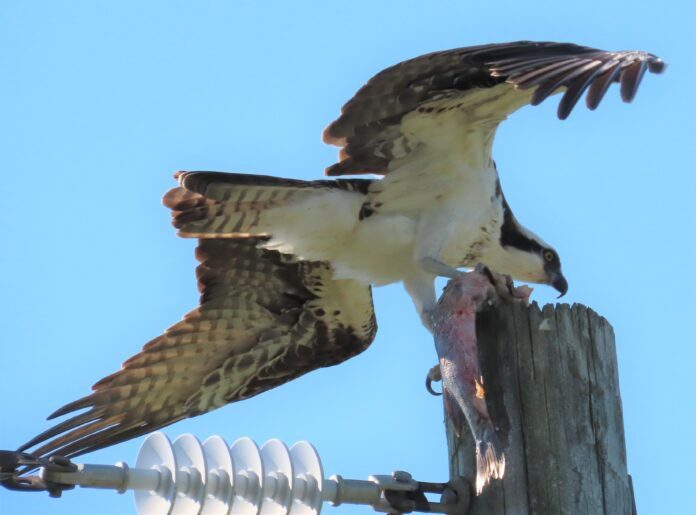 Having partaken of a breakfast, with friends, and having my camera with me, I decided to revisit the small riverside park, where a week ago I had seen some of the birds there.

They didn’t fail me, and I got good views of Canada Geese, Ring Beaked Gulls and, more interestingly, Ospreys.

Two young ones made hungry calls from above which initially drew my attention but no parents arrived with food. Further calls to my left attracted me to the other side of the park and a hydro pole on which stood a grownup bird which appeared to be eating.

I zoomed in my camera to see that it was an Osprey feeding on a huge fish. What more incentive did I need than that to start me walking across the grass to get a closer view?

I was fairly exposed so headed for the shelter of the nearby building with seating beside it where I could sit and steady my camera for some more close‑up shots.

What a sight that was to see, as the bird clutched a huge fish in its talons and commenced to eat it whilst balancing to keep a hold of its perch in the odd gusts of wind!

I could still hear the young ones calling out and the bird above me returned their calls now and again, but was still intent on feeding first. I watched it for half an hour or more as it devoured the fish from the head end and got some really good, but maybe gruesome pictures, of what it was eating with relish!

I, of course, was waiting for it to take flight with the fish to get an in‑flight picture of it on its way back to the nest. Well it happened all so suddenly that even though I was poised and ready, or so I thought, it was airborne and going, just like that!

I snapped off once and then it was out of sight, I know not where, but it suddenly appeared on the nest with the chicks!

From my vantage point I could see the three of them at the nest and the two young ones greedily eating whilst being watched by Mum or Dad who didn’t stop long before launching itself off and heading away from me.

It circled back, somewhere across the park, but was not easy to see.

So, having had a super experience once again, I decided to head for home to see if there was anything of interest going on in the garden.

But that will have to wait until another time.

Until then, enjoy what nature has to offer you, but, more importantly, stay safe and well.

A beautiful, sunny Autumn day in the countryside

Why I shouldn’t make assumptions!