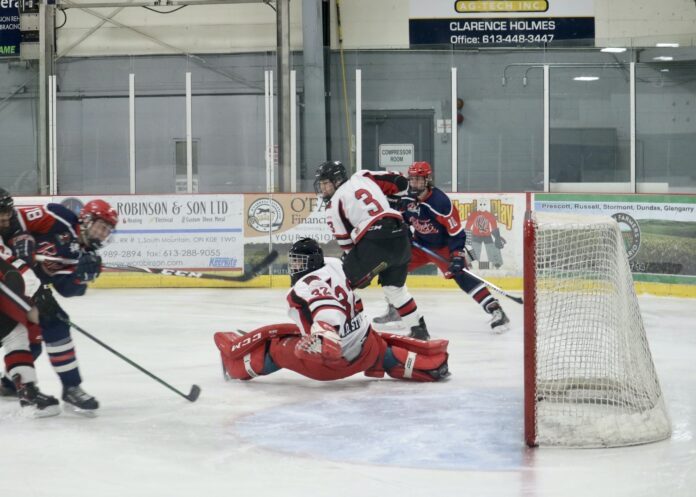 The Winchester Hawks are back at it! Due to pandemic protocols, there are no spectators allowed, but some of the restrictions previously imposed have been lifted. Prior to the Boxing Day lock down, the Hawks could play against the Richmond Royals. Now they play against the Char Lan Rebels. It’s still only one team, but at least it’s a different team. The Interim Commissioner of the Eastern Ontario Junior Hockey League (EOJHL), Matthew Couvrette has announced that, “as happy as we are to announce that we will be returning, we must be transparent in stating that there will be no 2020-2021 EOJHL Regular Season. Given the current regulations, it is not feasible to get the semblance of a season before the spring.” The goal of the rest of the season is to allow the players to play, focusing on player development. Couvrette said, “It is essential to offer programming to the players giving them every opportunity to further develop, as well as provide the physical and mental relief that so many of us need at this time.”

They played their first scrimmage against Char Lan Rebels on March 6th. They won with a final score of 9-1. Rookie Noel Klassen scored a hat trick, and Mac White scored 2. Lucas deVries made 42 saves! Four other players scored goals: Logan Schmidt 1, Reese Donnelly 1, Frederic Knight 1, Tyler Melvin 1. Friday, March 12 the Hawks won against the Char Lan Rebels 3-0. Xavier Dusablon made 42 saves for the shutout. Saturday they lost 7-5. Initially they fell behind 6-1, but rallied to end respectably. They play again next Friday, March 19th.