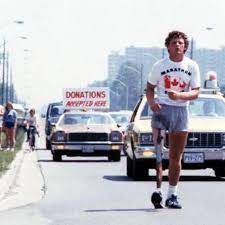 The route for the Run stretched approximately 10 km, with water checkpoints at each of the three road crossings. Rotarians were available during the Run to drive any participants back to the school once they had reached their limit.

“Although always in our hearts, this time of year brings back memories of those we have lost to cancer,” reads an online post from the Rotary Club of Chesterville. “The Terry Fox Foundation is working hard to find a cure or improved treatments especially for children. With your support, they will continue to carry on Terry’s Dream of A World Without Cancer.”

Meanwhile, the official Terry Fox School Run is set for September 23. During the school run, students are optionally invited to bring a donation for the Terry Fox Foundation, but all students participate in the Run regardless. Students in area elementary schools often tally their laps in various creative ways, such as by having a staff member punch a hole in a shoe-shaped paper every time they complete a lap.

The Terry Fox Run is an event named after Terrance Stanley “Terry” Fox, who endeavored to run the entire way across Canada in 1980 to raise awareness about cancer and to raise money for cancer research after a battle with cancer that cost him most of his right leg.

Terry was from Port Coquitlam, BC, and he began his journey by dipping his leg in the Atlantic Ocean on Canada’s East Coast on April 12, 1980, with the goal of running all the way home. Terry’s journey was tragically cut short on September 1, 1980 in Thunder Bay, after running a remarkable 5,373 kilometres. His cancer had returned – this time to his lungs – and on June 28, 1981, Terry passed away, but not before insisting that his Run and the fight against cancer must continue.

Supervised by the Terry Fox Foundation, the Run has raised over $850 million in Terry’s name to fund cancer research, with the amount increasing every year. Events are held both in Canada and internationally, with money being raised in other countries usually being used to fund research in the host country.

Those interested in learning more about Terry Fox and his legacy can visit https://terryfox.org/.