On Christmas Eve and Christmas Day, residents living near the South Nation Watershed were warned that a great deal of rain was going to fall, and flooding was possible as the ground was frozen, and the river already quite high. Sure enough, pictures from the South Nation River running through South Mountain taken on Christmas, resemble those taken in very early spring. Many sump pumps were working overtime as water went where it could.
A couple of weeks before Christmas, we had a cold spell that froze enough ice to make the river in Chesterville look inviting to at least one adventurous youngster, quite possibly saved by an observant bus driver.

Right now kids are skating on some back bays, and along the sides of some shallow or slow-moving rivers.

South Nation Conservation is asking people to be very careful heading out onto the ice. Winter is fully upon us, but our fall was unusually warm, and there are many places on the river that are not frozen. Where there is ice, the thickness is not uniform. Ice formation is affected by snowfall, air and water temperature, current, and depth. Blue ice is strongest. Grey ice can be dangerous. The repeated cycles of freezing then thawing that have been happening more over the last few years due to climate change, mean that the ice is not as predictable as we may remember.

Kids are home from school because of our current shutdown. Parents are juggling work and remote learning. People are busy, stressed, and distracted. Take a moment to review ice safety with the children in your life. 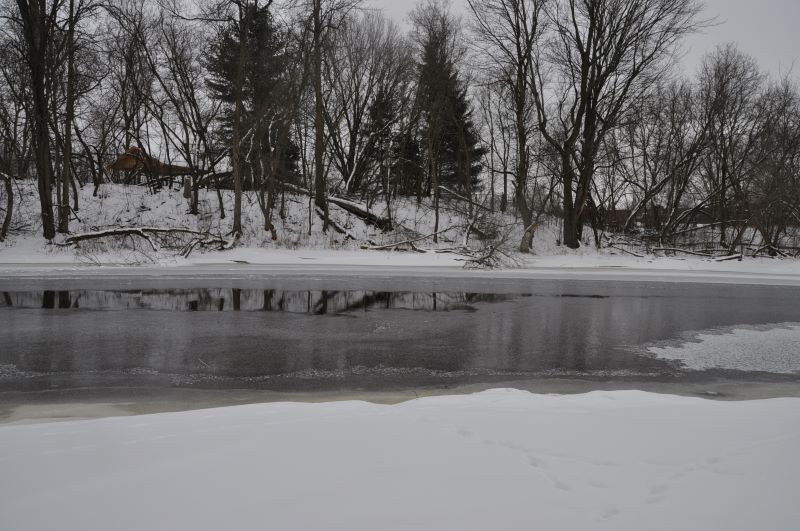 If you do plan on going ice fishing, or spending any time on the ice, make sure to let people know where you’re going, and when you plan to return. Check with local residents or anglers for information on ice conditions. When going ice fishing, ensure you have a provincial fishing license for those over 18. This year, you can fish in Ontario without a license between February 13 and 15.

Two men fell through the ice on Mississippi Lake on New Year’s day, north-west of here. One man, 26 years old, managed to climb out right away. The other man, 57 years old, could not climb out, and remained in the water for 45 minutes, until rescued by boat by the Beckwith Fire Department.