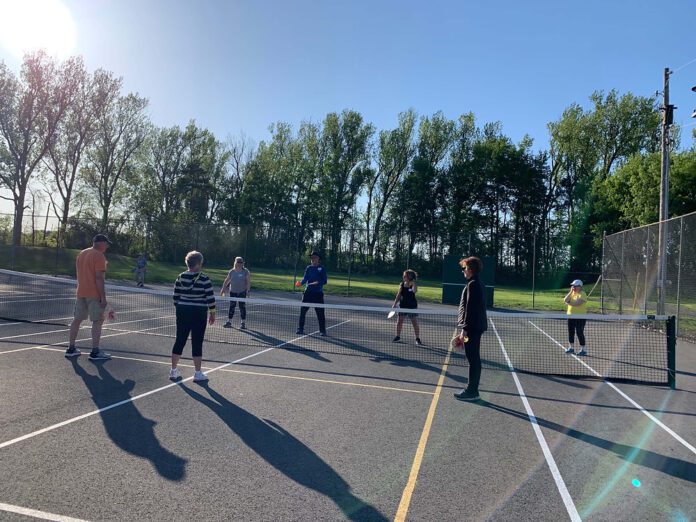 With the tremendous support of the Township of North Dundas, pickleball is becoming the fastest growing sport in North Dundas as well.

It all began several years ago with a discussion with the North Dundas recreation staff. At that time, they began planning to introduce pickleball to our township. Unfortunately, the covid pandemic put everything on hold until the summer of 2021. Last summer, as restrictions were being lifted, discussions began again in earnest. At that time, the township repaved and painted lines on the tennis courts in both South Mountain and Chesterville. (Yellow for pickleball and white for tennis). In addition, they purchased nets, paddles, and balls. This summer, five new courts were established at the Sam Ault Arena, which provides indoor play opportunities until the ice goes back in.

Once the courts were ready, beginner clinics and individual introductory lessons were offered. This was a huge success as there are now more than 85 adults who have participated in these sessions and ready to play. Soon, Drills and Skills clinics will be scheduled to help teach strategies and move those who want to learn more about the game into the next level of play.

The best thing about pickleball is that we are learning new skills, we are being active, and we are having fun! Currently, thanks to the support of the Township of North Dundas, there is no cost to play. For those wanting to try the sport, there are opportunities to join other players (with diverse levels of experience) during open play sessions.

The schedule is as follows:

All are invited to join us during the open play times, but players are also free to play at the outdoor courts in South Mountain and Chesterville anytime on their own. Pickleball is known to be a sport for older adults, but it is actually a sport for all ages. Currently, the focus is on adults who, in turn, can teach their children, making it the perfect family sport.

You do not have equipment? No worries. Paddles and balls are available during the above open play times. They can also be borrowed from the township office on St. Lawrence St. in Winchester. Alternatively, two volunteers, one from South Mountain and the other from Chesterville, also have equipment available. Contact Cindy at 613-407-4585 (Chesterville) or Dora 613-9892118 (South Mountain) to make arrangements.

To keep up-to-date with what is happening with Pickleball in North Dundas, join Dundas Pickleball Group on Facebook or for more information contact Sandy Laneville at 613-774-2555 or Nancy Williams at 613-774-3200