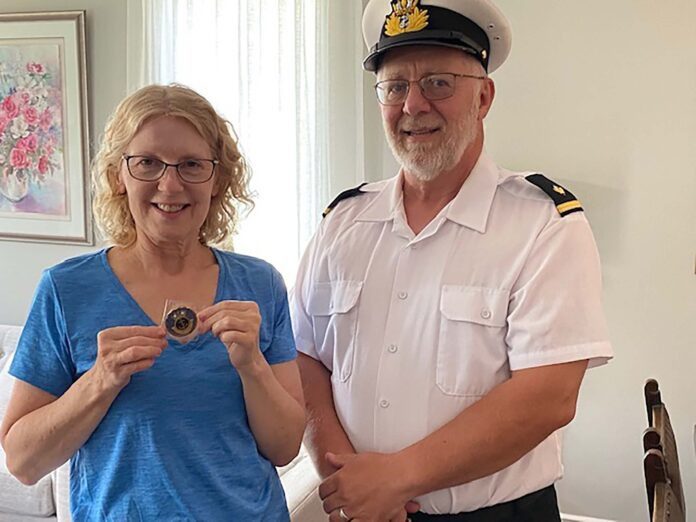 WELL!… Isn’t this awkward! I promised you in the last article to write and introduce you to our second civilian recipient of the Navy League of Canada 125th Anniversary medallion.

A short time ago, a knock on our door at home was opened to a smartly turned out, uniformed Navy League officer. Randy Murray is the Commanding Officer of Navy League Cadet Corp (NLCC) Assiniboine. Always a pleasure to see Randy who has done an outstanding job with his team leading his young cadets through the COVID challenges. We were surprised to see him at our door in uniform.

He informed us that NLCC Assiniboine had made their decision on the award of the two medallions, and that he was here to present the civilian supporter award – to the astonished lady standing next to me.

Now Carol is not an award or kudo seeker – quite the opposite. In the thirty-plus years together, all of her many church and community endeavours have been quietly contributed without fuss or bother. She keeps her head down and gets on with the job at hand, pitching in wherever she feels she can. Lots of hugs, lots of “thank you’s” have been her reward.

While this formal acknowledgment was a delightful surprise, she was confused as to why she had been chosen. After 38 busy years in Defence, the last six in the office of Minister Peter McKay, she came to Kemptville not wanting to be embroiled in another organization. She did, however, want to contribute to the community in some way. And so, it would seem, she has, with the cadets.

She has apparently forgotten her baking for the bake sales to raise money, or for special cadet events and celebrations, her driving of cadets to and from their spots on numerous Tag days, her attending every event, her help in reconciling the new uniform inventor, her hours of selling duck race tickets in businesses in town, her labour-intensive work in re-tiling the back NLCC office floor, and her help with the carpentry, renovations, and painting of the class and Board spaces.

These activities were visible. Less evident were her enthusiastic partnering in the financial investment that made the naval symbology in the armoury, the new sets of trophies recognizing the annual achievement of the individual cadets in the two corps, and the renovations possible.

I am very grateful that the officers of Assiniboine were not keeping their heads down, but rather were watching and appreciating the quiet contribution of this quietly contributing Kemptville citizen.

Both Carol and I were very touched by this thoughtful gesture. But for me, it reinforced that this lady sure is a keeper!
Next week, it’s all about the cadets.