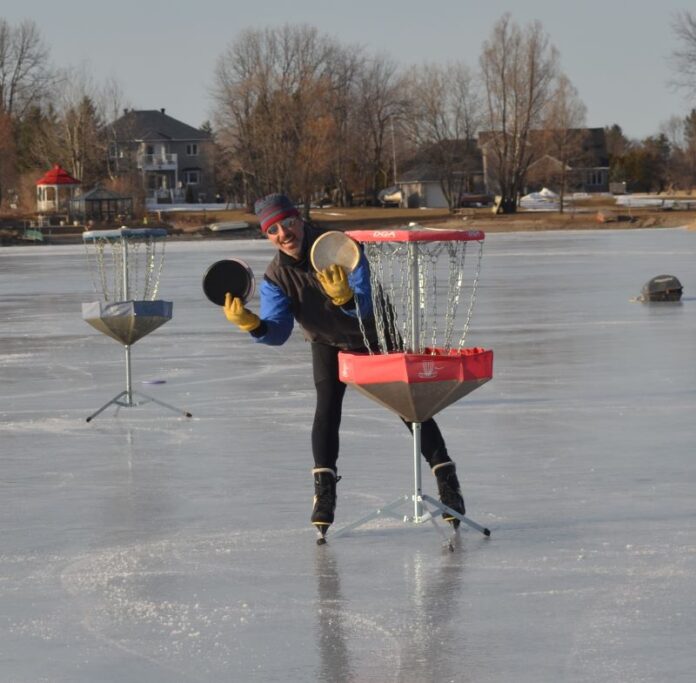 A local man has created a new winter game that is perfect for COVID-19 and beating the winter blues.

As part of an effort to get outside and active this winter, Larry Pegg of Greely invented a game called LaToss. The name is a play on Canada’s national sport, Lacrosse, but it has more in common with a game called disc golf that is played in about 40 countries around the world.

LaToss uses disc golf baskets placed in a line along the ice. The idea of the game is to try and get the disc golf putters (small frisbees) into the baskets as you are skating past them. After each round, players skate further away from the baskets to make it more of a challenge to sink the discs.

Larry has always loved the feeling of tossing a frisbee around and has been playing ultimate frisbee and disc golf since 1989. His involvement with the Ottawa Disc Golf Club and playing the sport in the winter was part of his inspiration to adapt the game to ice. “It kind of gives a lot of flexibility for those that might be intimidated by playing the long golf game and they just want something really quick and active,” Larry says.

Like disc golf, LaToss is the perfect game to play during COVID-19 because it involves no physical contact. Everyone has their own discs, and it is easy to socially distance while on the ice. It is also good for the soul as Larry says that fun and creativity is all part of the game. “Fun is encouraged,” he says. “Extra points for pirouettes and horrible moves on ice. You could do stars on ice if you want. Just have a good time.”

Larry has been inviting friends and members of the Ottawa Disc Golf Club to come play LaToss on the small lake in his back yard. Although the season is over due to the warm weather, he was able to hold several successful games before the ice got too soft to skate. “I love skating and just being outside in the fresh air,” says Ottawa Disk Golf Club member, Brenda Cox, who came out to play twice. “It’s quick, like Larry said, it’s a lot of fun, and he really encourages us to have fun.”

Larry’s goal is to motivate people to get outside, especially in the winter months. Besides inventing LaToss, he has also created a persona called “Shadow Man” where he films his shadow while doing outdoor activities like cross country skiing, and uploads them to YouTube. Larry says making an effort to get outside and have some fun this winter has done wonders for his mental health. “The Shadow Man series is – get out. It’s beautiful. There’s no ticks, there’s no mosquitos, there’s no black flies, there’s no deer flies, there’s no horse flies. Have a good time and enjoy it while it’s here.”

To follow Larry’s Shadow Man adventures, you can find him on YouTube under Larry Pegg Shadow Man. To learn more about the Ottawa Disc Golf Club visit their website at www.ODGC.ca.