On Sunday March 28, prompted by a social media post and fueled by anger, some people headed off to Gypsy Lane in Winchester to help clean up garbage that had been dumped. The clean-up crew included Mayor Fraser and his wife, as well as members of the Purple Helmets, a local ATV group. 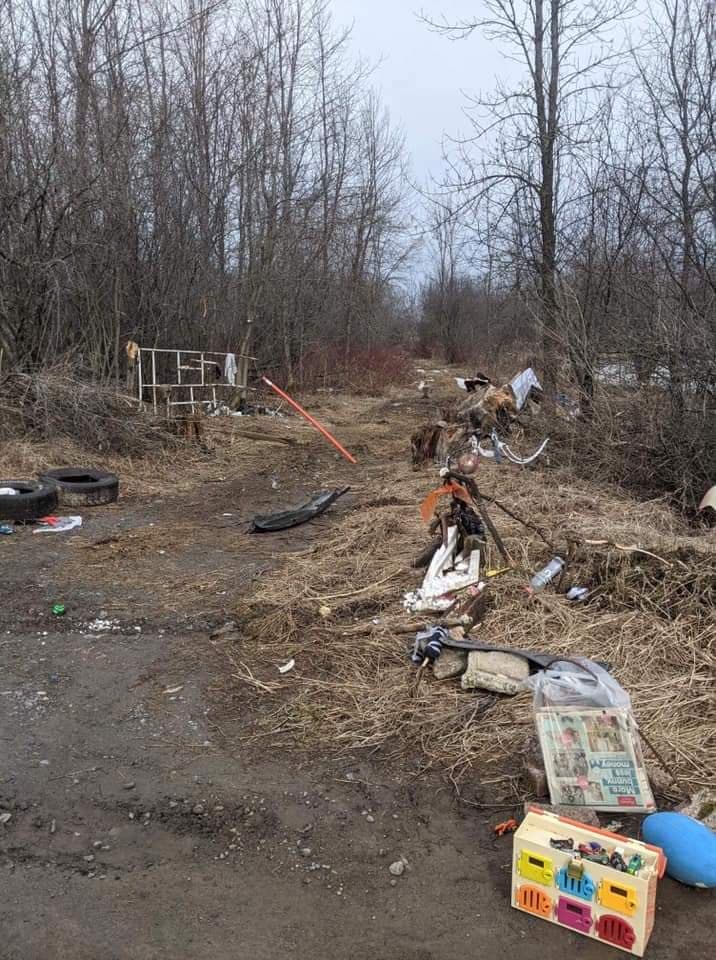 The problem isn’t merely littering, it is the dumping of full bags of garbage. These garbage bags could have easily been put at the curb. There was also lots of loose garbage left behind from people visiting the area. The dumping isn’t limited to Gypsy Lane. Any infrequently used areas can become impromptu garbage dumps, including access entrances into fields, or fields hidden a bit out of view. One woman got her foot tangled in nylon wire left in garbage in that area two years ago. She ended up with a broken arm, two broken ribs, and months of rehabilitation for her injuries.

Sunday’s impromptu garbage clean-up on Gypsy Lane prompted Johnathan Barnhart to start a new Facebook group called North Dundas Clean-up. Every Sunday, Johnathan will choose an area within North Dundas, post the time and place on the Facebook group, and ask for helpers. On Easter Sunday, there was a scheduled clean up of Highway 31 from Cass Bridge to Winchester Springs.

The garbage on Gypsy Lane sparked quite a discussion. Some people suggested gates or trail-cams, but others pointed out that those would only encourage people to find somewhere else to dump their garbage. Trail-cams and gates cost money too, and could both be targets of vandalism. The problem doesn’t seem to be lack of access to a garbage dump, or transportation. The culprits evidently had a vehicle to get the garbage to Gypsy Lane and could just have easily driven to the landfill on Boyne Road which is open to the public.

The landfill takes a wide variety of items in addition to garbage, and sorts it in an effort to divert waste from ending up in landfill. The dumping fees are comparable to other area landfill sites. North Dundas has curbside pickup, allowing each household two bags or cans, there is no requirement to purchase Bag-Tags, unlike some neighbouring municipalities.

Some nearby municipalities such as Frontenac, Lanark, and Grenville, are trying various things to try to discourage illegal dumping, while encouraging recycling, and repurchasing. North Grenville, for example, has started selling tags for large items to be picked up at the curb twice or four times a year. Various dumps in Lanark and Frontenac have instituted Amnesty Weekends, when bigger items can be taken to the dump free of charge. The problem of illegal dumping doesn’t have an apparent solution, and is not limited to Gypsy Lane. It’s unfortunate that community members in North Dundas need to organize weekly clean-ups, but comforting to know that people care enough to volunteer.