The much-missed Winchester Dairyfest will finally be back this year after a two-year hiatus. On January 10, the revitalized Dairyfest Committee held a meeting the primary purpose of which was to answer one burning question – is a 2022 Winchester Dairyfest feasible? Once the Committee came up with a unanimous “yes”, some of the preliminary planning work began.

While there is much to be worked out and decided upon before any details of this year’s festival can be known with any certainty, some general ideas discussed at the first meeting include having a scaled down event, strictly outdoors, with music and dancing. The event could look something similar to the Township’s Meet Me on Main Street festival, which had been a yearly event locally for several years before the COVID-19 pandemic. The first meeting also looked at the responsibilities for various roles on the Committee, with some roles filled, and others still needing a volunteer to step up to the plate.

Alexandra Donovan has volunteered to act as Chair, and there are many new faces on the Committee, up significantly from last year’s four-member group. The Times explored some of the history of Dairyfest – including what caused the two-year hiatus – in the August 11 issue of last year. Although 2020 was the first year without a Dairyfest since the festival was started as a centennial celebration for Winchester in 1988, the COVID-19 pandemic did not cause the cancellation of that year’s festival. A dwindling number of volunteers caused the cancellation of the 2020 event, which is run entirely by people donating their time. 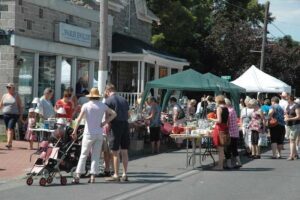 The 2021 festival was subsequently cancelled partially for the same reason, and partially because the remaining Committee members did not feel it would be appropriate to ask for sponsorship from struggling local businesses during the pandemic. However, the Committee did put on a few smaller scale activities last summer to keep the spirit of the event alive. The Committee members, and, in fact, members of the North Dundas community more generally, have much work cut out for them before this year’s Dairyfest can become a reality.

Community members are being asked to voice their opinions regarding aspects of the event, such as where it should be held. To follow this discussion and contribute your own ideas, visit the Winchester Dairyfest Facebook page at www.facebook.com/winchesterdairyfest. Anyone wishing to help make sure that this year’s Dairyfest is a success by providing sponsorship (either as a business, or as an individual), should contact Committee Sponsorship Coordinator, Hayley Bedford, by phone at 343-777-2702, or by email at hayleyjbedford@icloud.com. Those wishing to help out by volunteering their time, or in any other way, can get in touch with the Committee by email at info@winchesterdairyfest.com.