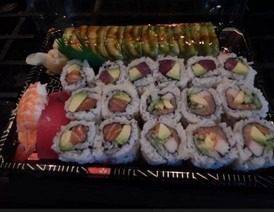 The community of Morewood and beyond is overjoyed that Chef Eddie has begun making and selling his sushi locally.

Located at 98 Main Street inside the Morewood Lucky Mart, Chef Eddie has been busy creating his delicious sushi. Whether you are looking for a simple Maki plate or a party tray with a variety of different types of sushi (including vegetarian!), Chef Eddie has you covered.

Since opening the store, Chef Eddie had planned to make a grab and go food section. With a background in sushi making, he went ahead and introduced his creations. The support from the community has been overwhelmingly positive.

Chef Eddie is the sole employee, so he says that is why he has a daily order limit as he does all the food preparation himself. He hates to turn people away or refuse orders, so he does his best to fill as many orders as quickly as possible. Clearly, the response from everyone who has tried his sushi has been positive.

Renovations to the Lucky Mart and new management, combined with delicious sushi, have attracted customers from neighbouring towns.

Chef Eddie has received such praise as “this may be the best sushi I have ever tasted” and “no need to go anywhere else, Chef Eddie’s sushi is the best.”

There is no doubt that we are lucky to have such a talented individual in the area!