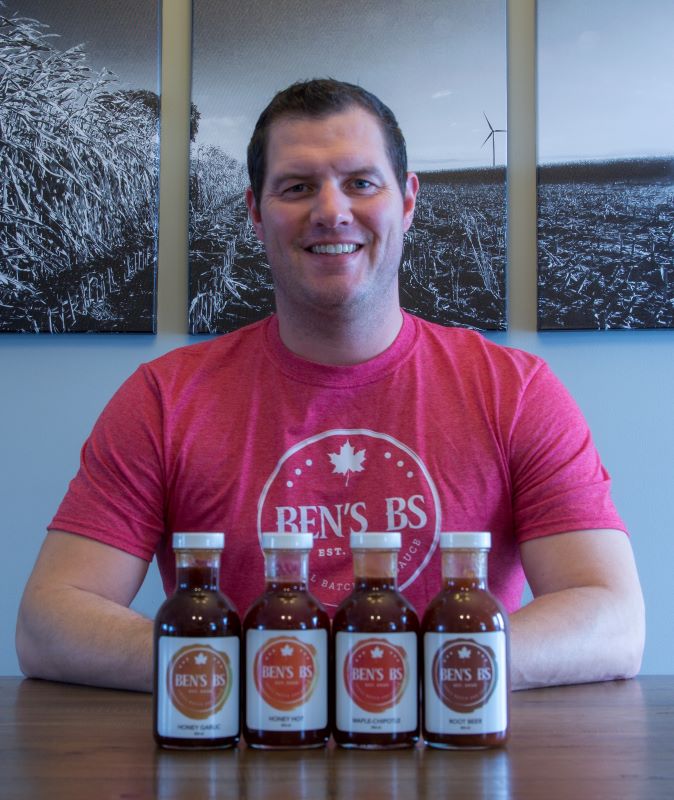 Ben Macpherson began his small-batch barbecue sauce company, Ben’s BS in November 2020. He left a previous job in 2019 to spend time with his boys, and then the pandemic hit. The extra time at home allowed him to take his love of cooking in a new and different direction. He began perfecting his recipes, testing them out on friends and family, and ended up with “Truly, some quality BS!”

Starting the business wasn’t a new idea, but the pandemic gave him the time to launch it. Ben started working in restaurants as a cook in his 20s, then shifted into kitchen managerial roles. His low-overhead business started in the cafe kitchen of one of Ben’s high school friends, Jo-Ann Houle, owner of Cup of Jo’s in Winchester. Ben credits the success of his business in part to Jo-Ann’s support. He now crafts his barbecue sauces in his own kitchen, recently certified by the Eastern Ontario Health Unit (EOHU). He makes four signature flavours: Maple Chipotle, Honey Garlic, Honey Hot, and Root Beer. He cooks up 300 to 400 bottles at a time, with his mother’s help, and says he’s not sure what he’d do without her!

Starting a business anytime is a challenge, but it is especially daunting during a global pandemic! Ben says the support given to each other by small business owners has been overwhelming. Each business is trying to provide people with a unique product or experience, and doing that takes a lot of time, energy, creativity, and sacrifice. Fellow small business owners understand what it is like, and the desire to help and support each other follows from that understanding.

Having a low overhead, Ben has avoided some of the challenges of running a business during the pandemic. He sells online, as well as in brick and mortar stores. The Canadian Food Inspection Agency and the EOHU were helpful in ensuring that he was compliant with labeling and safety regulations. Launching as he did during the pandemic, he has not accessed the Economic Development Office or Officer at the Township, nor any of the assistance programs offered by the provincial or federal government. He has found support in his friends and family, and the customers who appreciate his amazing barbecue sauces! Word of mouth advertising, and the fact that the product speaks for itself, keeps people coming back.