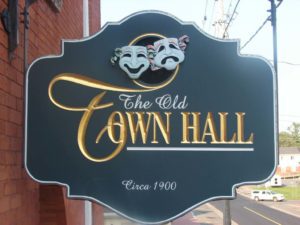 Each movie day has an earlier, family-oriented movie, and a later movie geared more toward teens and adults. The earlier show is at 4 pm, and the later show at 7 pm, with doors opening 45 minutes before the event. This Saturday will feature Marcel the Shell with Shoes On as the earlier show, and Top Gun: Maverick as the later show. Tickets can be purchased online and are only $5, with canteen items for just $1 each, which is the inspiration for the event’s slogan, “big screen… small prices”.

Winchester local Aaron Dellah has been volunteering at the Old Town Hall for close to 20 years. “The goal is to run affordable movie nights for the community,” said Aaron. “We try to keep the price as low as we can.” One of the reasons Aaron sees the value of keeping movie prices low is that upon moving to the area decades ago, he was struck by how many people used local foodbanks. This made him realize that affordable family entertainment was another imperative locally. The movie nights are not-for-profit and are made possible entirely by volunteers.

One unique aspect of taking in a big screen movie in Winchester is that the Old Town Hall building itself is rich in history. The building was constructed in 1904 at a cost of just $5,000. It served as the town’s library for more than 50 years, as the town’s jail for 65 years, and as the Ontario Provincial Police headquarters for 10 years. Unique features such as bars on the windows provide a glimpse into the building’s past as a law enforcement building. Now, the building serves as a home for the Dundas County Players, in addition to hosting many other events such as an open mic café every Sunday.

In addition to the “Night at the Movies” events, the Old Town Hall also hosts a special movie event during the day on the first Wednesday of every month. There is a “Moms and Tots Movie” in the morning, and a “Seniors Movie” in the evening. “We started those pre-COVID, we ran them for about a year and a half,” said Aaron. “They were actually quite successful… the Seniors Movies. We actually sold out a couple of times!”

To learn more about Night at the Movies, or to purchase tickets, visit http://moovies.ca/ – and note the extra “O” paying tribute to Winchester’s rich dairy farming roots.